I read a lot last year. I cleared 41 books in total, surpassing my target by 1. So, did I extend my target for this year? No, I’m going for 40 again – it seems like a good target and I don’t think I’d necessarily find more reading time in my days to get another 10 in.

That being said, I’m already off to a strong start to the year with 7 down and 2 on the go at the moment.

Oddly enough, there’s a bit of a theme that ties three of these four – and at least another four on the TBR for the next couple of months – together that wasn’t necessarily intended but Martin Cruz Smith’s Gorky Park was the first of the year and probably set the ball rolling.

Gorky Park was one of those books I’d often see in bookshops and ponder its contents before moving on but, this time, I read the back and took it home. An absolute 5 Star book – well deserving of the attention and praised it received. A crime thriller set in Soviet Union during the Cold War, Gorky Park reads more like literary fiction than your standard thriller and is so thoroughly engrossing and, in Arkady, powered by a great character – I’m genuinely glad that this one evolved into a series of novels and will  be adding the following instalments (along with everything Ellroy’s) to my longer term reading list.

Trying to vary my reading I thought I’d take a stab at a ‘classic’ early on this year and ended up continuing a theme. One Day In The Life of Ivan Denisovich by Alexander Solzhenitsyn is set in a Soviet labour camp in the early 1950s and follows the single day of one of the prisoners – Ivan Denisovich. Ivan’s deep into a 10 year sentence for ‘spying’ – he’d escaped his German captors during the war, made it back to his lines and was arrested as a spy. Solzhenitsyn had first-hand experience of the Gulag system and it adds a sense of weight and truth to this novel (if you’re up for a heavier read his Gulag Archipelago is a game-changer). It’s a short but intense read and noteable as it was one of the first accounts of Stalinist repression to have been published (less than 10 years after Old Whiskers’ death).

Of course, there’s always a need for something lighter and, as my Discworld collection slowly grows toward completion, I’ve usually got a Terry Pratchett novel ready to reread for the first time in at least a decade. I had – again – forgotten just how painfully funny The Last Continent is. First published in 1998, that means it had been two decades since I’d last read it and, as I had the briefest of memories of it and remembered nothing of its plot it was akin to reading it for the first time. Pratchett’s parody of Australian culture and media touch-points – Priscilla, Queen of the Desert, Mad Max, Crocodile Dundee all get a warm roasting – easily sits as one of his funniest and most accessible reads. The invention of Vegemite and Australian slang, in particular, had me chuckling into the night.

Back in 2016 I read Joseph Kanon’s Leaving Berlin. It’s a great novel, a cold-war thriller set in Berlin as the divide was going up. Another book-shop spotting, this year’s Defectors again finds Mr Kanon setting his work in the cold war, this time – spotting that them yet? – in Moscow. As the title suggests, Defectors tackles the theme of the defections in the 1950s / 60s and, specifically, what came next. A former CIA agent, Frank Weeks slipped the net and escaped to Moscow and, over a decade later, sends word to his brother, Simon, that he – and the Soviet State – wish to publish his memoirs and wants to use Simon’s publishing house to do so.

Leaving aside the twists of the plot for fear of giving anything away, where Defectors excels is in the depiction of life for those former ‘field agents without a field’ – living in a strange suspended state, a  sort of prison within the larger prison of the Soviet Empire. Technically ‘free’ to be yet only allowed to travel to enclosed dacha complexes, use certain stores and continually monitored. Kanon manages to fill his story with sufficiently realistic and historically accurate details to make it ring true without overdoing it and slowing down the momentum – this is a thriller after all. Kanon clearly an author whose back catalogue now warrants investigation.

Up next: more Russian classics, some World War Two diaries and some new novels from Nordic Noir’s godfathers…

It’s a strange thing and one that’s most likely a result of the level of History taught in school during my education but great swathes of modern, post-war European history remained a mystery to me until very recently.

For entirely personal reasons I’m learning increasingly more about the history of Eastern Europe and what happened behind The Wall, as it were (on that note I sincerely recommend Revolution 1989: The Fall of the Soviet Empire) and am continually fascinated by what I discover.

One hole in my knowledge, though, is the period between the end of the Second World War and the formation of those two distinct countries that I grew up aware of: East Germany and West Germany. It may be down to education but then there’s also the fact that so little was allowed to be known about what happened in certain countries behind the Iron Curtain but there was, at least, an awareness of two distinct halves of Europe and, in particular, Berlin.

I’m oddly fascinated, for example, how the West managed to retain its ‘half’ of a capital city so deep in the Eastern ‘half’ of the country and the logistics therein.

There’s the fact that Berlin was on the receiving end of a very large battering from all members of the Allies in the closing stages of the war. There’s the period when it was divided in two like the rest of Germany and half fell under the GDR while the other ‘the west’. But there’s a knowledge hole that exists around that in between period; the time when a city was on its knees, its citizens still reeling from the destruction and the two opposing factions were still carving it up. 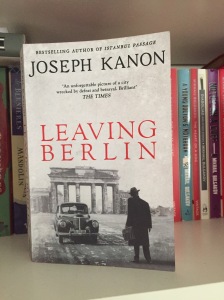 Leaving Berlin by Joseph Kanon goes a long way to both illuminating that period and creating an itch for more. It’s also one of those happy instances in Waterstones where you need another book to take advantage of the “Buy One Get One Half Price” deal and it the book you grab out of curiosity rather than having sought it out turns out to be a brilliant whim.

Set in 1949 Leaving Berlin finds writer Alex Meier returning to Berlin from America where he’d fled the Nazis in 1934. The official line is that – as a treasured author – he’s been invited to return by the Soviet authorities to help establish cultural future of the Socialist country. In fact he’s returned only to allow him to return to America. Persecuted for his communist beliefs during the McCarthy witch-hunts, he’s made a deal with the young CIA; return to East Berlin and act as their agent in order that he might return a patriot and be reunited with his son.

Except, of course, it all goes a bit tits-up for him from the off when his CIA contact is killed and he finds himself in a deadly game of espionage and counter espionage.

The dialogue, particularly, is great but the pacing and twists of the plot are fantastic.  What stands out for me, though, is how much more compelling it becomes as a result of its setting. With the war and its events still in people’s memories normality is a distant concept and so what people did during and just what they’ll do to survive after is a huge factor. Just as the lines between the city are in a state of confusion, so too the lines between who to trust. There’s a strange sense of surrealism throughout as a new normality attempts to establish itself yet is still surrounded and hindered by the physical (large swathes of the city remain piles of rubble, there’s power outages) and psychological aftermath of the war that mirrors that of Alex upon his return to such a city after living in California, out of the way of the destruction.

I’ve not read anything by Joseph Kanon before but I’ll certainly be on the lookout to do so on the basis of this. It’s also time to find what I can to plug this hole in knowledge too.