Ah, Last Days of April; now here’s a band that should be known to a much wider audience.

How and when I first came across this band I cannot entirely recall – I recall the name being one of those that were bartered about by a few of those friends of mine back a decade or so ago (before the internet was what it now is) amongst which music tip-offs were traded continually and all were keen to turn another on to a great band – Deep Elm / Bad Taste Records’ rosters supplying plenty of fruit…. think Appleseed Cast, American Football etc.

I can recall sitting in on a friend’s band practice when the guitar player hit the opening chords of Aspirins and Alchohol (of which I shall write more in another post) and getting hooked. 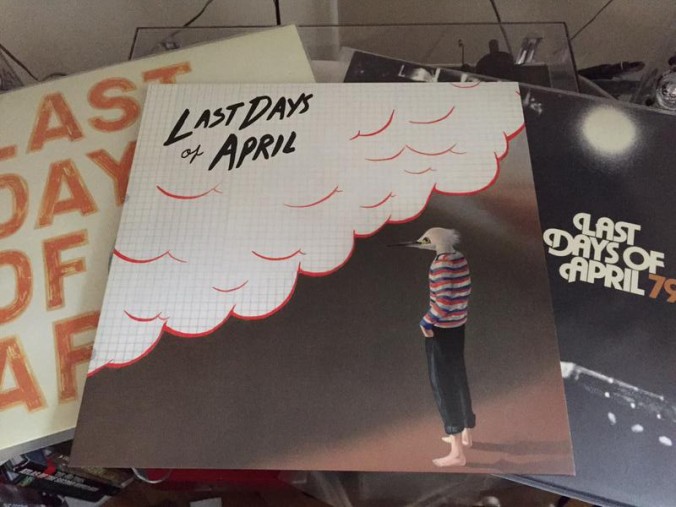 This Swedish band – which has now evolved into a somewhat rotating cast of musicians around core singer/songwriter/guitarist Karl Larsson – has been steadily releasing music since 1997 and evolving with each addition to the catalogue. Having been along for the ride since If You Lose It (and having caught a couple of shows in intimate venues), I’ve relished the band’s continued progress.

Arriving three years after their last effort Sea of Clouds marks a continuation of their sound’s evolution and Larsson’s maturity as a singer and songwriter.

Since Might As Well Live – the album which I think marks the end of the original LDOA sound – Larsson appears to have become an artist of second halves. Both Gooey (see the extremely catchy ‘Forget About It’ and ‘Why So Hasty’) and 79 (‘Lily’ and ‘Feel the Sun Again’) have reserved their best moments for Side B. That’s not to say these albums are only worth playing on one side, more that Larsson appears to stretch out and push beyond the simple pop structure. It’s then that the real fun is to be had.

The same is most definitely true of Sea of Clouds; it’s on those songs where Larsson is pushing beyond the sounds of his earlier records that the best songs are found. ‘The Artist’, ‘The Way Things Were’ are charming and straight-forward, ‘Oh Well’ a little more contemplative than LDOA of old and then we get to ‘The Thunder and the Storm’ – a stately tune underpinned by some superb playing that finally lets loose and propels the song into something else altogether. ‘Someone For Everyone’ is probably the most LDOA sounding song on the album but it’s the title track that holds it altogether.

‘Sea of Clouds’ is likely to become one of the songs I listen to most this year. A real slow-burning bruiser of a song, the title track is the best thing on here. A huge leap in songwriting from his earlier material, Larsson’s voice here is both wiser and more assured than ever as it’s given room to lament over a rolling-dark-cloud like backing with some sublime guitar flashes.

There’s a line in ‘America’ from Gooey: “I can’t go back to you, America” which has proven strangely prophetic as it seems that, starting with 79 and continuing here, Larsson has very much been under the thrall of America – specifically Americana. Where once LDOA albums tore past in a frenzied rush of fiercely strummed electric guitars, drums and songs about everyone’s love life, here the songs are of a calmer, more mature nature, embellished instead with delicate acoustic guitar layered with lapsteel – even a bit of honky-tonk on ‘Get You’.

A much more sedate and contemplative record than I was expecting but a strong and compelling collection of songs that’s not only impressive on first listening but suggestive of a real grower in Sea of Clouds. Hopefully it won’t be another three year wait until the next instalment.