I saw her curled up in a chair. Fast asleep. Even in the weak light I could make out the silted lines of mascara that ran from her eyes and down the pale expanse of her cheeks, almost past her nose.

She had obviously fallen asleep waiting for me.

And that was the first time I thought about murder.

From the PR: “Andy Boyd thinks he is the luckiest man alive. Widowed with a young child, after his wife dies in childbirth, he is certain that he will never again experience true love. Then he meets Anna. Feisty, fun and beautiful, she’s his perfect match … and she loves his son like he is her own.  When Andy ends up in the hospital on his wedding night, he receives his first clue that Anna is not all that she seems. Desperate for that happy-ever-after, he ignores it. A dangerous mistake that could cost him everything.

A brave, deeply moving, page-turning psychological thriller, A Suitable Lie marks a stunning departure for one of Scotland’s finest crime writers, exploring the lengths people will go to hide their deepest secrets, even if it kills them…” 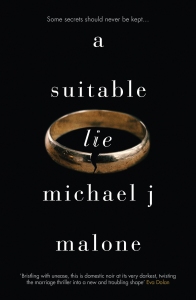 I’ll put my hands up; after the initial hook, most certainly an attention grabber, I started to wonder where this one was going… the courtship of Andy and Anna makes for a pleasant and often humorous read but not one that I was expecting after the opening quoted above.

But then… well, then I realised just how crafty Michael Malone is. All the gentle domesticity, all the loved-up courtship and redemption for Andy -the average guy trying to raise his son after the devastating loss (and here Mr Malone writes with a convincing and affecting sense of emotion) of his wife…. it’s just the lure to get you on the hook because this book.. this book is a sneaky bugger; lulling you into a false sense of security before delivering a read stuffed with a palpable sense of dread and tension and one which is, more frequently than not, a disconcerting and terrifying read.

Sitting at the core of this novel is the theme of domestic abuse and here Michael Malone takes a familiar trope and flips it on its head in a way that many have tried before but few have done with such startling and genuinely harrowing results. Malone deals with a very difficult topic with both sensitivity and boldness, delivering scenes of raw emotion and – frankly – horror which manage to skilfully tread the line between exploitation and being shocking realistic. There are scenes in this novel that make for an uncomfortable read but a story that doesn’t challenge the reader isn’t worth the paper it’s printed on and A Suitable Lie both challenges and rewards.

I don’t want to give anything resembling a spoiler away here as I’d rather recommend all to go out and read but I will say that there are parts of this story that left my mouth open. The conclusion is both heartbreaking and gripping in its intensity and twist – to use an oft-overused phrase – a real roller-coaster.

Michael Malone has a clear and unarguable talent when it comes to prose and story and A Suitable Lie is an engaging read  that will remain with you long after the final page has been turned – it went very quickly from being a “where’s this going?” to costing me sleep as I simply had to find out.

Huge thanks once again to Karen at Orenda Books for sending me yet another great read and do check out the other stops on the BlogTour: 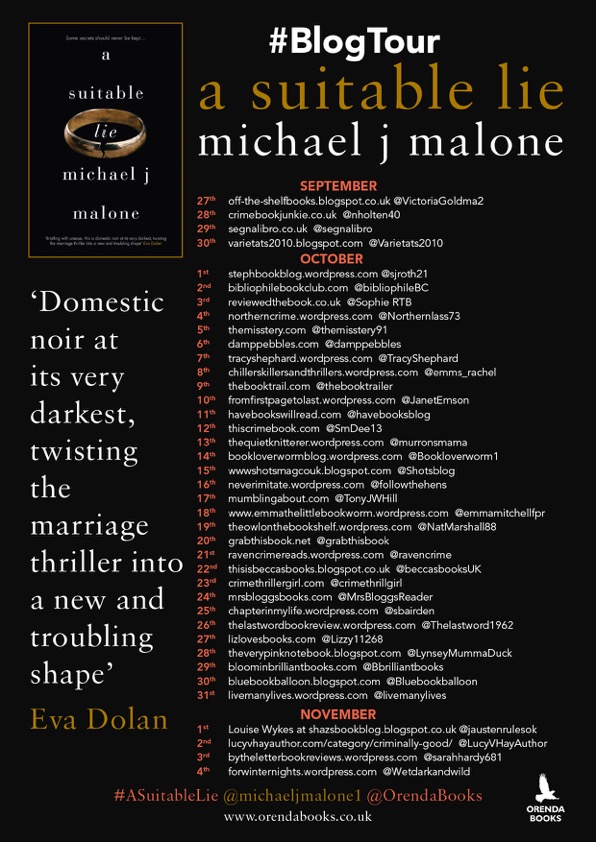 2 thoughts on “A Suitable Lie”