“I tried to combine personal and political, so you can read into the songs either way. You can read the record as a comment on what’s been going on, or you can read it just as relationship songs.” 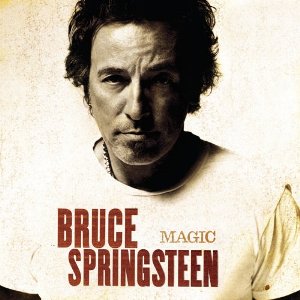 In December 2016 Bruce sat down with Brendan O’Brien at his home, handed him a book of lyrics and then played the tunes on his guitar, offering the producer the pick of the litter. The two then decamped to Atlanta again and with a core band of Springsteen, Weinberg, Bittan and Tallent, laid the basic tracks for the album. Other band members were called in to lay down their parts as needed and sessions were complete within two months. Another example of the pair’s more precise recording practice, it meant that without the opportunity to spend protracted amounts of time exploring alternative avenues and ideas, all effort and concentration focused on the one group of songs and bringing them to perfection. Shorn of the fiddles of Seeger Sessions and the acoustic dirge of Devils and Dust, the resulting Magic is the high benchmark of Springsteen’s second chapter and bursts with a fire and passion that sets a lot of his work in the shade.

I’ll be clear – as if it wasn’t already – I fucking love this album. The songs here are harder and sharper than on The Rising, the E Street Band – during its late peak – is playing tighter than a duck’s arse and the result is a joy to behold. The sound is ridiculously lush and there’s more revealed with every listen; the mandolin on ‘Magic’, Federici’s organ on ‘Livin’ In The Future’, the moody atmospherics of ‘Devil’s Arcade’ but I’m jumping ahead….

It starts with guitars. A thousand guitars and pounding drums, as ‘Radio Nowhere‘ leads an impassioned, energetic blast of all the E Street’s finest qualities and Bruce growling out his call to arms “Is there anybody alive out there?” against a thumping beat and euphoric blast from Clarence Clemons’ sax. Magic is Bruce and the E Street tuned in and meaning business as they bore through a new Springsteen classic and straight into ‘You’ll Be Coming Down’ which sounds like a blast of Bruce’s sound from earlier decades:

Indeed, Bruce spoke of how for this album he tried to get back to his earlier, romantic sounds last heard on Born To Run and there’s a wealth of nostalgia in the sound*.

“There’s some classic Sixties pop forms. California-rock influences –Pet Sounds and a lot of Byrds. I wanted to take the productions that create the perfect pop universes and then subvert them with the lyrics – fill them with the hollowness and the fear, the uneasiness of these very uneasy times.”

Take ‘Girls In Their Summer Clothes’ – which, apparently, Bruce had little interest in but O’Brien pushed for its inclusion – as an example of this; the doubling up of Bruce’s voice for the first time in goodness knows how long against a gorgeous backdrop (and a great rhythm guitar part) . Or the horns of ‘Livin In The Future’ that blast like a Freeze-out on a certain avenue. Or the out-and-out joy of ‘I’ll Work For Your Love‘.

But even here, the fire lurks beneath the surface. Bruce is angry and the pain and disbelief are shot through every song no matter how much he may have tried to allow the songs to be taken without them. There’s the groundskeeper who “opened the gates and let the wild dogs run” in ‘Livin..’ or  how the “city of peace has crumbled, our book of faith’s been tossed” in ‘I’ll Work For Your Love’, there’s no getting around it and it makes for some of his finest and most pointed lyrics in a long time. Certainly the best of Bruce V.2

I’ve mentioned before that  ‘Gypsy Biker’ shares a lot of ground with ‘Shut Out The Light’. The earlier track was one of Springsteen’s Vietnam tunes, ‘Gypsy Biker’ is one of a more modern war – Johnny gets to pull out his Ford and polish up the chrome in the former, the biker in the latter is coming home in a coffin; “Sister Mary sits with your colors”. It’s one of his best.

I remember at the time of release, Magic was referred to as being about “love in the time of Bush” **. There’s no direct references here, no mention of specific wars or Bush (though it may well be his “boot heels clickin’ like the barrel of a pistol spinnin’ round” on ‘Livin In The Future’) but he doesn’t need to.  The threat he felt in 2006 is there throughout.  Perhaps its most telling on the beautiful title track. Quiet, gentle guitar and chamberlin undercut with strings and Van Zandt’s mandolin make for a soothing, hypnotic stroll or dance as Springsteen lists ‘magic’ tricks but then it’s there in the last verse:

“Now there’s a fire down below
But it’s comin’ up here
So leave everything you know
And carry only what you fear
On the road the sun is sinkin’ low
There’s bodies hangin’ in the trees
This is what will be, this is what will be.”

The album’s closing track*** ‘Devil’s Arcade’ is a dark bruiser of a tune that’s perhaps the most literal on it. A lover’s recall of portentous earlier memories and passion before her love enlists and winds up being wounded “the cool desert morning, then nothin’ to save, just metal and plastic where your body caved” and in a hospital while she waits for his touch –  Weinberg hammers home the rhythmic thump against the repeated “The beat of your heart, the beat of your heart”.

Again; it’s one of the finest things Springsteen has written and this album is chock-full of them. It’s strange to listen to this album again (though it’s rarely out of rotation) now as we find ourselves staring down even darker corridors than GW had lead the world. Then, as now, this album’s warmth and spirit remain a lighthouse; there is love, there is light and it needn’t be the monsters that call the tune, we have the choice.

*Something which would lead to a burst of writing just as the Magic sessions wound down and form the basis of Working On A Dream.

**Not the working title of a late-night Gabriel García Márquez adaptation.