From the PR: “The body of a Bushman is discovered near the Central Kalahari Game Reserve, and the death is written off as an accident. But all is not as it seems. An autopsy reveals that although he’s clearly very old, his internal organs are puzzlingly young. What’s more, an old bullet is lodged in one of his muscles … but where is the entry wound?
When the body is stolen from the morgue and a local witch doctor is reported missing, Detective ‘Kubu’ Bengu gets involved. As Kubu and his brilliant young colleague, Detective Samantha Khama, follow the twisting trail through a confusion of rhino-horn smugglers, foreign gangsters and drugs manufacturers, the wider and more dangerous the case becomes… A fresh, new slice of ‘Sunshine Noir’, Dying to Live is a classic tale of greed, corruption and ruthless thuggery, set in one of the world’s most beautiful landscapes, and featuring one of crime fiction’s most endearing and humane detectives.”

When a new Detective Kubu book arrives on my shelves I know for a fact that I’m going to love every second of it. Reading the work of Michael Sears and Stanley Trollip (writing as Michael Stanley) is never anything short of a delight. Detective Kubu is, three books in, one of my favourite characters and there’s always a grin on my face when he’s on the page. In Assistant Superintendent David ‘Kubu’ Bengu, Sears and Trollip have created a character I could read all day every day and never get bored. I’ve said it before but it’s impossible not to say it again but in a genre stuffed to the bindings with great characters he’s a real stand out, even if I’ve now abandoned the snacks and keeping cookies in my own desk draw, it’s a delight to read a character so wonderfully human and warm who’s only ‘flaws’ are his dietary indulgences. It makes the subplot concerning his family worries all the more affecting too.

But, of course, a good character does not make a good book alone. Dying To Live is a great read for so many other reasons as well. The portrayal of Botswana and it’s clashing of cultures both in terms of those embracing the new vs traditional ways (the ongoing import placed on witch doctors and traditional healing that played such a key role in Deadly Harvest) and place of the Bushmen in that society along with the inclusion of those colloquial words from South African languages amongst the English add, as intended by the authors, a real sense of authenticity and make for an immersive experience.

Nor is Kubu the only character in the novel, obviously. The supporting cast are made up of faces familiar and new and Messrs Sears and Trollip possess a real knack of creating a compelling ensemble each of whom could carry a story on their own, I’m sure. It’s great to see Samantha Khama developing as a strong female member of Botswana’s CID and it’s clear that Constable Ixau is a character that’s got legs and I look forward to more of his involvement in the series. At least I hope there’s more to come.

So… what of the plot? Well; it’s a real gripper. What seems like a routine call out for an unimpressed detective soon escalates into a story that reaches across continents. A fantastically written slow burner of a plot that builds into a complex mix of corruption and greed with plenty of red herrings and sucker punches to keep you hooked to the very end  with a mystery that throws smuggling, organ theft, murder and political turpitude into one ridiculously rewarding brew. Dying To Live firmly marks the writing team of Michael Sears and Stanley Trollip as one to very quickly get addicted to and demonstrates that the northern climes have got nothing on ‘Sunshine Noir’ when it comes to compelling, blockbuster intrigue and action.

If you’ve not been lured into exploring the Detective Bengu series then Dying To Live is a great place to start and, if you have, you’ll love every page.

Thanks again to Karen at Orenda for my copy and do check out the other stops on the blogtour. 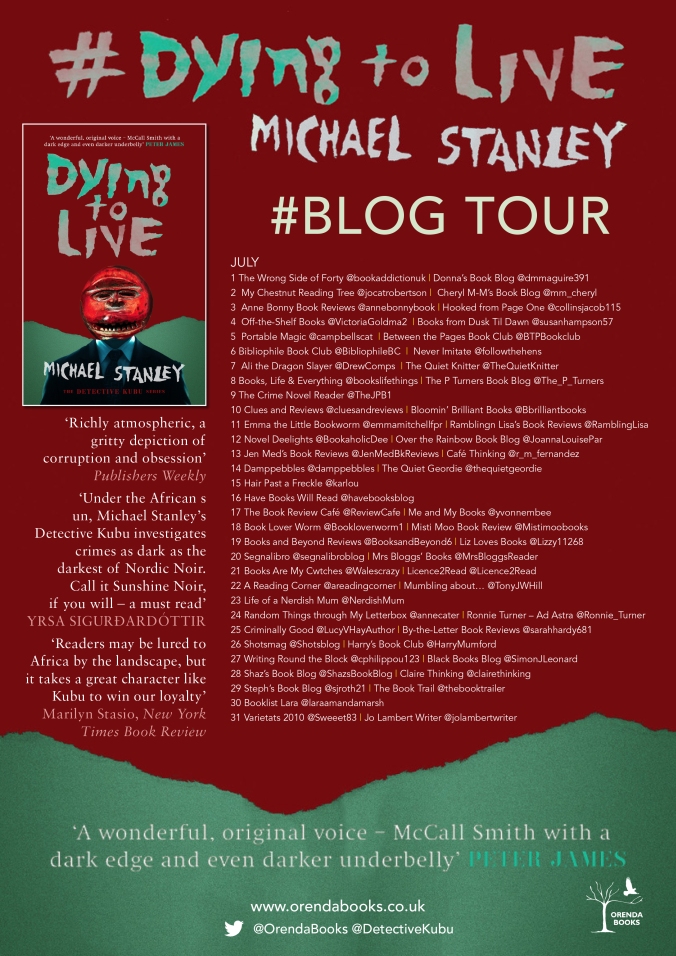 6 thoughts on “Blog Tour; Dying To Live by Michael Stanley”

“Spirit of my silence I can hear you, but I'm afraid to be near you
“They'll all look at me and say, and they'll say,
“Feel the rhythm with your hands...”
“The heart is a storybook, a star burned out...”
“The highway is alive tonight
“See shades of you in all the green