No 2019 roundup here – if I manage to keep to schedule  on these that one should arrive in late October.  Instead we roll past the halfway mark of my first decade: 1986.

It’s an odd year for music this one. I have vivid memory of the songs of this time – given that radio still plays a lot of them it’s no real surprise. I also have a clear memory of a walk home from school (we lived about 10 minutes’ walk from my primary school) and seeing a smashed cassette on the ground and having, at the time no idea who Bon Jovi were or why someone would have stomped on Slippery When Wet (my guess, now, is that they couldn’t hear ‘Without Love’ one more time without going loco).

Jon and his hairspray-loving mates didn’t really kick in over here in the same way as the US.  ‘Livin’ On A Prayer’ did hit the top ten later in the year but here the radio was ruled by songs like Madonna’s ‘Papa Don’t Preach’ (True Blue was released in June and went on to bonkers numbers in sales) and Surivor’s ‘Burning Heart’ or, even worse Diana Ross’ ‘Chain Reaction’ and Boris Gardiner’s ‘I Wanna Wake Up with You’ that still haunts my brain. The Communards’ take on  ‘Don’t Leave Me This Way’ saw off the horrors of Chris De Burgh’s ‘Lady in Red’ and Berlin’s ‘Take My Breath Away’ for the title of biggest single. Dark times on the radio.

Bob Geldof picked up an award in ’86, he was awarded an Honorary Knighthood for his Band Aid / Live Aid work, though as he’s not a citizen of the Commonwealth he can never be Sir Bob…

In August, guitarist Bob Stinson was out of The Replacements, the group he founded, with the old ‘creative and personal differences’ explanation being wheeled out. Stinson preferred the faster, louder sound of the band’s earlier songs while Paul Westerberg’s growth as a songwriter was taking him down the quieter, introspective route with songs like ‘Here Comes a Regular’. Bob’s drug and alcohol abuse only made the situation worse.

Late September, Metallica were on tour in Sweden promoting Master of Puppets and members drew cards to determine which bunks on the tour bus they would sleep in. Bass player Cliff Burton won and chose to sleep in Kirk Hammett’s bunk. Next morning, as the sun rose, the driver lost control and the bus skidded and rolled over several times. The rest of the band were ok but Burton was thrown out of the window. The bus fell on him, pinning him  to the ground and killing him. While detectives would point to the lack of ice and the skid marks being exactly like ones seen when drivers fall asleep at the wheel, the driver was cleared of any fault. Burton would be replaced by Jason Newstead who would remain with the band until 2001.

It was goodnight from The Clash in ’86 as what was left of the band disbanded as did Men At Work, ELO and The Firm, the short-lived Paul Rodgers and Jimmy Page supergroup. However, The Afghan Whigs, Band of Susans, Boards of Canada, Manic Street Preachers, Slint, and two of Boston’s finest – The Pixies and Buffalo Tom all formed in 1986, putting the scales firmly in the positive.

There were a lot of album releases in 1986 but, in terms of what would fall in my listening orbit, it’s a slim entry of a year. Metallica’s Master of Puppets which contained not only the stonking title track but ‘Battery’ and ‘Orion’ arrived in March and Van Halen, now fronted by an actual singer called Sammy Hagar, dropped 5150 a couple of weeks later – it was the first of their run of four albums with Hagar, all of which would hit Number 1 on the charts. The glorified strip-club MC that previously fronted their band dropped his own debut Eat ‘Em and Smile in July.  While Dickhead Dave had Steve Vai, there’s no comparing to EVH, even when he’s in ballad-mode, the guy drips riffs and tricks:

In a similar arena-bound genre, Bon Jovi unleashed Slippery When Wet in ’86 with it going on to shift something like 30 million copies.  Meanwhile debuts this year came from Bruce Hornsby and the Range who, just for fun, said ‘get a job’, Big Black, Steve Earle and Crowded House whose strong, eponymous first album featured some absolute great tunes and one of their biggest singles to date:

Having dropped two belters in 1985 you’d be forgiven for expecting Hüsker Dü to take a breather but, instead they released Candy Apple Grey via their new major label Warner Bros. and shifted ever so-slightly enough from their hardcore punk sound to create what could be considered one of the first college-rock records. Former SST label-mates Sonic Youth released EVOL in 1986. It’s a real favourite of mine, possibly in the Top 5 of their albums – it’s their first with Steve Shelley on the drum stool and marks the turning point from the whole ‘no-wave’ to the sound they’d perfect over the next few years (1988 is pretty much a done-deal).

Bruce Springsteen topped the charts toward the end of 1986 with Live 1975 – 85. This (until then) career-documenting box set broke records for pre-orders and remains an absolute must in terms of both Springsteen’s catalogue and live records.. I mean I could feature this as it wasn’t covered in the Least to Most series but going for a live album would open up the ability to include compilations and … well I don’t think it can count. So, that leave: 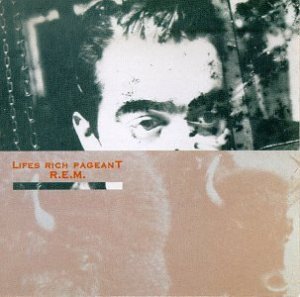 I got into R.E.M around the release of ‘E-Bow the Letter’ single in 1996. By that time it was impossible not to know who they were, this was after ‘Everybody Hurts’ and ‘What’s The Frequency, Kenneth?’ etc had been riding the airwaves for a few years but it was that song that properly hooked me when I heard it on the car radio one day.  From there, as with so many other bands, I went back and scouring and collecting the back catalogue and discovering R.E.M’s IRS albums was almost like finding the work of a different band.

My second-favourite R.E.M album behind New Adventures… Lifes Rich Pageant was the band’s fourth and strips away the murky sound of Fables of  the Reconstruction for something dramatically more direct and punchy sounding – well, certainly in terms of early R.E.M.

The choice of Don Gheman as producer is an odd one – the dude was known for his work with John Mellencamp and you’d be hard-pushed to listen to ‘Jack and Diane’ and think ‘this is the sound those dudes who did Harborcoat need’ – but it works, even if they didn’t work together again. Songs like ‘Just a Touch’ and ‘Begin the Begin’ are the clearest beneficiaries and were the hardest the band had sounded at that point, paving the way for future tracks like ‘Drive’ and Accelerate:

Stripping away the deliberate cloud in the sound and opting for a crisper approach may have been down to the fact that Stipe was becoming increasingly confident as a singer and as a songwriter with lyrics that were now taking on political and environmental / ecological themes like the one-two punch of greatness that make up ‘Fall on Me’ and ‘Cuyahoga’, which are underpinned by Mike Mills’ harmonies and rolling bass lines:

For me this is the album where R.E.M step away from the fog and sound both contemporary and forward-thinking. While it sounds very much of the time it isn’t bound by it either. It’s riddled with the sounds and hallmarks of what would soon be pegged as the R.E.M sound but still sounds fresh and exciting some three decades plus later and when you listen to the great live albums the band have made, some of the biggest cheers are reserved for songs from early albums like Lifes Rich Pageant – because they’re brilliantly crafted nuggets written before all the weight of expectation that would soon greet every R.E.M album and remain highlights in a catalogue stuffed with great tunes.

My only issue with this album isn’t the apostrophe. It’s the fact that the track listing on the back of the album isn’t correct. It’s never been and has never been corrected either, it drove me bonkers at first and it still gets me each time I listen to it.