In 1997 after forging a path for the harder-edge of the ‘Seattle sound’ for thirteen years and with a handful of classic tunes and two definitive ‘grunge’ albums to their name, Soundgarden called it a day.

For a while it was a bummer. They released a compilation album at the end of ’97 that seemed like a thoroughly decent wrap-up (complete with the obligatory scrap off the studio floor masquerading as a ‘new’ track). Chris Cornell, having for over a decade been seen towering – he’s a tall chap – over the world of alternative music – released a pretty good solo effort about how shit his life is when messed up by chemicals he should know better than to touch before joining RATM members in Audioslave, delivering another collection of solid tunes then making friends with a Timbaland, making a god awful stab at playing music his voice would be ill-suited to even at its best (it’s been a ravaged shadow of its former glory for some time now), writing a Bond theme and generally becoming a parody. Matt Cameron became the lynchpin that holds the still mighty Pearl Jam together – having taken back the drum stool that he’d filled when the then-untitled group put together the fabled demo that was to reach the ears of Eddie Vedder – and Kim Thayil and Ben Shepherd essentially shopped their services around with guest spots and short-lived group efforts. 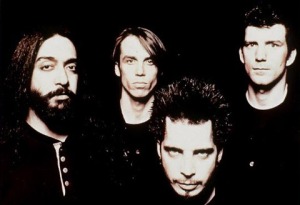 It’s strange but it seemed like the lack of Soundgarden as an existing band wasn’t a bad thing. I don’t recall a conversation where anyone said ‘damn I wish they were still making music’. To be honest it seemed like they’d fulfilled their purpose and, while it was dramatic at the time, the demise of these forbears wasn’t such a ‘cut down in their prime’ and that it was probably better to have done so than carry on until sales declined and their legacy diminished.

And yet it would seem nobody told them this. For, sure enough, in 2010, Soundgarden ‘regrouped’. Queue reunion concerts, ANOTHER compilation album and even a live album over an eighteen month period. Now a Soundgarden live album sounded like a great idea except that Live on I-5 was recorded from shows on their awful 1996 tour and sounded like a quickly produced, poorly realised and pointless cash-in. Almost as much as the ridiculously named Telephantasm compilation that preceded it. As if to highlight how unlikely and un-required this one was it was shipped out as part of the Guitar Hero: Warriors of Rock game. Something that revealed what’s really going on here.

Soundgarden were a force to be reckoned with. From Ultramega OK through to Down On The Upside they lead the way. No music lover is without Superunkown and Black Hole Sun still dominates ‘Best of the 90s’ type lists and video run-thrus. However, the importance of Soundgarden and its acknowledgement is one that seems to have escaped the band during its initial lifetime – of course not, in 1997 when they called it a day they were still current. It’s only with the benefit of a decade’s hindsight that people look back on the scene and their role was really noted. So while bands like Pearl Jam are still forging ahead and forward in style and hence never out of the spot-light, Nirvana’s sudden rise and dramatic end ensured their place in the lexicon and yet those same kids that wear the iconic smiley t-shirts weren’t having the importance of Cornell & Co hammered home.

Which is what it feels like the recent releases from the Soundgarden camp reek of: We’re important too – LOOK! Here’s another best-of, here’s a live album – we’ve got a new album coming soon and so we’re still relevant. Indeed, how best to grab this new generation of music buying youth’s attention than to get slapped in with the Guitar Hero game? Hell, it worked for Aerosmith right and they’re close to Jurassic in age. And here, I believe, is my problem with it: it feels forced and is being forced onto everyone.

The new album was streamed a few days before it’s release and I had a copy of it on my iTunes shortly after that. It’s not there now. I listened to it. I gave it fair chance. I ignored the ridiculous title and G0d-awful artwork and opened my ears as only someone who’s on their second copy of Badmotorfinger can. Yes, I loved Soundgarden. I was hoping for it to be great and to show that Live On I-5 and Tele.. were just poor record company decisions. I was wrong.

King Animal is dull. It lacks the originality and fire that used to ignite Soundgarden albums. There’s no sense of purpose to this collection of songs other than “look, we’re here still and called Soundgarden” only it’s more “we’re here now and called Soundgarden just like that awesome band in the nineties were; we deserve attention”. Once a song starts you know exactly how it’s going to go, how it will get to the end and that, really, you don’t need to hear it. There is zero surprise. It’s riffs by numbers and Cornell’s bellow is now akin to a lion cub imitating a roar as loud as possible yet without any real balls or feeling behind it.

What’s worse is the amount of build up and media whoring that’s surrounded it. Pearl Jam have been hyping it out – given that Cameron is still a serving member that’s no surprise, emails from music press and label and the band have been bludgeoning my inbox with news and teases of riff-heavy snippets from “the new album by the legendary Soundgarden”. It was already huge and important before anyone had heard a full song! I’m not making this up – people were giving it 5 star reviews on online stores while it was still on pre-order and not a note had been heard – just because it’s Soundgarden. One comment I distinctly remember was “people who hate this are just stuck in 1994.” True, 1994 was a great time for Soundgarden but I also love Down on the Upside and there’s been a whole lot of music released since then that makes me go gooey inside. No, those that don’t like King Animal aren’t stuck in the past – they’re simply those who were hoping for a good album, not a reheat of decade old stodge.

You cannot release an album and have it become amazing just because you say it is. An album should be great by its own merits not just because it’s by a group that defined a genre and happen to have made it. They can’t make an album great just because it’s made by Soundgarden. Had Cornell, Thayil, Shepheard and Cameron spend a year coming up with an album that was fresh, tight, vital and solidly original then that praise would be deserved. Had the album been chock full of the dynamics and variety that earlier work was then yes, hat’s should be off. King Animal is not that album. It’s tired even before the first song ‘Been Away Too Long’ – “oh look! Look what they did there with that song title! YES YES YES you have been away too long”, please – is finished.

The overall feeling from this album is that it’s just another few songs that will be stuck between Rusty Cage and Spoonman while the crowd look for a breather before shouting along to Fell On Black Days on the inevitable huge ‘we’re here still’ tour that follows. King Animal and the reunion surrounding it feels like a case of “we’re Soundgarden, we were important, pay us, we like the idea of acclaim but cash will be fine.”

Sorry but this sits up there with Smashing Pumpkins’ Oceania in terms of let downs from the years big releases from big bands. In fact, it’s more of a led down for at least Corgan is writing off the past and trying to do something new rather than simply expecting plaudits for what he did twenty years ago. Let’s be grateful Mark Lanegan isn’t feeling the need to grow his hair long again and give Gerry Lee Connor a call.

This is a bit of a negative post. Feel better, remind yourself of why Soundgarden needed to try harder:

“Now I’m at home in my own skin,
Heritage trains on an autumnal afternoon
“You can hate on it or you can hug it, you can get all mushy and lovey-dub-it,
“I think it’s dark and it looks like rain” you said “and the wind is blowing like it’s the end of the world”
“I know your name
“Outside there's a box car waiting...”