I’m aware that when I’ve muttered about new albums from ‘big’ names – referring, that is, to their importance in my music taste-range – I’ve been pretty negative. There have been more than a few albums released this year that I’ve loved (whether or not I’ll end up doing a Best of 2012 is another thing) so I thought I’d start mentioning a couple of those instead of just slamming new albums.

One of those bands that were always around but I never really acknowledged or paid attention to almost until it was too late, was Dinosaur Jr. By the time I got round to checking out one of their albums it was their comeback disc Beyond. It was being hailed as a ‘return to form’, and people were ecstatic as it was ‘as if they’d never been away’ – except to me they hadn’t really because this was the first time I was listening and knowing who was playing. I played the arse off that album. It absolutely slayed me. So much so that within a pretty short space of time I’d gotten the rest of their stock – my wife even managed to find the otherwise “bastard to locate at a decent price” Without A Sound for me in Paris. Suddenly the buzz around Beyond made sense. It was a phenomenal return to form after the lucklustre release J. had made during the 90’s with other musicians under the name of Dinosaur Jr. Which is odd because I really liked his two efforts with The Fog – so much better than, say, Hand It Over. 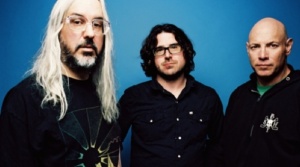 From that point I’ve been eagerly awaiting new Dino albums (or the recent J. Mascis solo record) and was not disappointed either with Farm or this year’s I Bet On Sky. It’s true that the three albums are all very much similar (even excusing the use of keyboards on opener Don’t Pretend You Didn’t Know); 10 or 12 songs, the bulk of which are sung by J and contain either hurried or gently fuzzy rocking leading up to the point at which J can’t hold back any longer and lets loose the guitar solo that continues until the end of the track. And you know what? I bloody love it. The melodies are a world clearer than they were on the bands original trio before the lineup became a rotational club, J’s a lot more confident at the old singing game and his guitar tone is beatific. His phrasing and fluidity mean that when each song breaks it’s more like being wrapped up in a warm blanked of tone. Somehow each time he breaks it sounds different and he finds something new on that guitar neck.

After my wife and I recently dug back into the 90s I was flicking through a book she got me last Christmas. It’s the photo collection Grunge by Michael Lavine and with a bit of text from none other than Thurston Moore. There’s a bit of a love-in with Thurston and J – Thurston (along with his basement and daughter) were in the video for Dinosaur Jr’s Been There All The Time and J played some shit-hot lead on Thurston’s amazeballs solo lp Trees Outside The Academy. Anyway there’s photo of Dinosaur Jr in there and – at the back of the book – a summary of all the bands featured within. Thurston’s summary of Dinosaur Jr reads:

“Awesome heavy melodic power trio from Amhers, Massachusetts…. Gerard Cosloy convinced the band to record an LP fr his Homestead imprint and it, along with its successor, You’re Living All Over Me, released on SST, became indelible blueprints for a generation of extreme yet beautiful guitar love core”

I like that phrase “guitar love core”. While the original trilogy was certainly something and the years in between yielded a few gems too I think the most recent clutch of albums from the band a lot more of a guitar love in. Plus it game on a gorgeous slab of purple vinyl and nice, high-quality gate-fold too.

One thought on “Watching The Corners”