Twisted crowd barriers. Lads lugging makeshift stretchers across a pitch strewn with the injured and bewildered. The dead lined up in rows on the turf. Twisted minutes. Twisted metal. Twisted news reports. Everything twisted.

Fan has been described as a must-read for anyone that started watching football after Hillsborough. I’ve not watched football before or after. It’s not my cup of coffee. Good literature, though, is. And Fan most definitely is good literature. 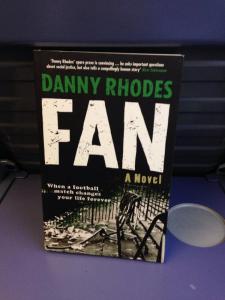 With some books of late I’ve felt that some holes in my knowledge have hampered my full understanding and enjoyment of a book. Most particularly this is down to certain Russian novels and my knowing barely anything of that country’s revolution. With Fan, this is not the case. While I have only the vaguest of idea who Brian Clough was, Danny Rhodes writes with such informed and heart-felt passion that I understood. The same is true for football fandom. It’s something that I’ve never grasped, a spell I’ve never been under. Yet Fan expresses the love felt for the game by its protagonist – John Finch – and so many with a clarity and firmness of belief anyone with a passion for something would understand and get on board with.

I knew little of Hillsborough before reading Fan, only what was occasionally mentioned in the news since. Danny Rhodes was there. He writes of it with an alarming clarity, bringing the horror into full focus as is his right.  John Finch was there. He never really left. To say it screwed him up would be an understatement.

Finch cannot move forward. He’s moved away but he can’t move forward. He’s moved from Grantham and its bleak oppression to the South where he finds himself equally oppressed – by the pressures of his relationship and the pressure of the past, reaching forward and pulling him under. Unable to operate in any gear other than neutral for the fear of his terror – the black mares – pulverising him. He’s gotten to the point of no return, clearly suffering PTSD, his job is now on the line and his relationship is crumbling around him.

When word reaches him that one of those friends with him at Hillsborough has “gone and done himself”, Finch realises the only way he can break free, prevent the same fate befalling himself and move forward is to go back. Back to Grantham, back to his old stomping ground, his old circle of friends and search for the closure denied to him those years ago.

Jumping between 2004 and the past, Rhodes deals masterfully with the portrayal of a man hunting for closure, wanting to do the right thing but left helpless and weak by his demons. It’s both immediate and raw and told with an increasing sense of urgency underwritten by the unnerving sensation that we’re dealing with a whole lot of fact in this fiction.

Tackling the effects of trauma, social injustice, the pain and cost of change – both personal and sociological, and, of course, the devotion of football fans, Fan works well both taken at face value and when looking at the subtext.

While football is at the heart of the story, Fan is about more, much more than the game. The subjects tackled will resonate with a much wider audience than any one team’s fans.  Danny Rhodes has delivered a compelling read, full of brilliant narrative and insights.

A big thanks, again, to Arcadia Books for sending me this book.