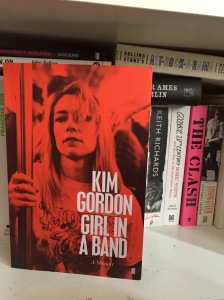 When Girl In A Band was released earlier this year I didn’t rush out and buy it. In fact, it was my wife that added this one to the collection and got to it first.

It’s safe to say that going in to this book I had mixed feelings. On the one hand; I love Sonic Youth and was anxious to gobble down more insights into the band, its working process and its body of work. On the other; Kim and Thurston’s split meant not only the end of Sonic Youth but a shift in focus whenever the band or either of them were mentioned in print. As such all press surrounding the release of Girl In A Band – including the excerpts printed in various publications – seemed heavier on that matter than the music.

It’s also safe to say that coming away from this book I have mixed feelings.

This is a memoir, after all. Says it right there in the title: Girl In A Band: A Memoir. So not an auto-biog in the traditional linear sense nor a “making of the album” type book. Further ‘nor’ is it a My Time In Sonic Youth book. No; it’s Kim Gordon’s memoir and to expect it to be solely on SY would be rude and demeaning as Ms Gordon’s life revolves around a whole lot more.

Gordon writes movingly about her early life and family – the terror inflicted upon her by her older brother and the greater terrors unleashed by his illness – and finding her way in the art world and path into music.

All that being said, though, Sonic Youth is/was a big part of Kim’s life and so does get plenty of page time too. Gordon is remarkably frank about her limited singing abilities – explaining that she asked Kim Deal to sing the harmonies on Little Trouble Girl as she, well, couldn’t – and offers insights into the writing / recording of many of SY’s tunes including my own favourite Tunic (Song for Karen).

There’s also plenty of revelations about life with the band – touring with Neil Young and its pitfalls, Kurt Cobain (a gentle yet tortured and manic soul here) and enough to suggest that Kim Gordon and Courtney Love don’t exchange Christmas Cards.

For all of the above I loved this book and would happily read it again.

Though as it’s a memoir and a recent one at that, the dissolution of Kim and Thurston’s marriage hangs heavy over the book. Hindsight often gets a few words in on recollections of earlier times and then there’s the break-up itself. It’s dealt with in, again, a remarkably frank manner – the discovery of text messages / emails from the Other Woman, attempts at counselling and repairing the marriage and, throughout, Kim’s own devastation.

It’s hard reading. Perhaps, to me, because the two had previously been more private about their relationship. When the announcement of their separation was made it was very quiet and via their label. In a world where celebrity couples can’t walk the dog alone without speculation appearing across the internet that their relationship is on the skids, it was a welcome relief for private matters to remain just that.

But then, as mentioned, this is her memoir and its her right to use the medium to set her version on the record, perhaps so as to never need do so again. It’s a little uncomfortable to read given just how open and forthright the sordid details of Thurston’s betrayal and the abrupt collapse of their marriage are laid bare – as though, perhaps, the disclosure was a little too full.

Nonetheless, Girl In A Band is a compelling read.

One thought on “Girl In A Band”