Tonight I’m having sex with Audrey Hepburn. Audrey’s breasts are different from the last time we fucked; they’re bigger, not as a firm. There’s a hint of a stretch mark on the left one. The leading lady is bent over, gripping the bedpost.”

….and so begins one of the most impressive and original books I’ve read to date. Michael Grothaus’ Epiphany Jones is a blisteringly sharp and biting novel that will drop jaws with every revelation.

A precis from the jacket / pr:

Jerry has a traumatic past that leaves him subject to psychotic hallucinations and depressive episodes. When he stands accused of stealing a priceless Van Gogh painting, he goes underground, where he develops an unwilling relationship with a woman who believes that the voices she hears are from God. Involuntarily entangled in the illicit world of sex-trafficking amongst the Hollywood elite, and on a mission to find redemption for a haunting series of events from the past, Jerry is thrust into a genuinely shocking and outrageously funny quest to uncover the truth and atone for historical sins.

Yep; one hell of a premise. Michael Grothaus expertly treads the line between outright hilarity and darkly disturbing, maintaining sufficiently steady a balance to keep readers gripped without . That’s not to say it doesn’t shock and appal – indeed, despite the sputter-your-coffee opening this novel is definitely not one for the light-hearted. Without wanting to give too much away, Epiphany Jones runs the gamut – from celebrity-porn addiction (which if you’ve read Grothaus’ journalism you’ll know isn’t all that fictional), the vacuity of Hollywood and the obsession with celebrity culture to moments which touch upon the very worst of humanity and some that are genuinely shocking in their brutality.

It takes a very brave writer to take his audience down those roads and a very gifted one to do so in such a way as to keep them with him. From the opening chapter it’s clear that Grothaus is just such a writer. He knows how to get a reader hooked and hooked in such a manner as to hold them, no matter how dark the road is going to get. The plot leads in gently – Jerry, king of the asides, is a celebrity-porn obsessed guy who also happens to suffer from psychotic hallucinations who goes from a mundane life working behind the scenes at Chicago’s Art Institute (when he’s not taking me-time breaks with Variety) to a violent life on the run that leads him to blowing open an international child sex-trafficking ring. Humour helps (if my First Aid training didn’t teach me not to put fingers down a choking person’s throat then this book did), as does the brilliant pace and the fact that the characters are brilliantly realised and intriguing enough to get you fully invested in them. As the plot unfolds there is so much to take in that it’s impossible to not want to see it through, Grothaus baits the narrative with enough mystery and intrigue to keep you desperate for more with each jaw-dropping revelation leading to another.

Back when I took my Literature degree I took what many considered an odd choice and wrote my dissertation on the use of humour in the works of Hemingway and Steinbeck. Yeah because books like The Grapes of Wrath and A Farewell To Arms are known fodder for stand-up routines. But, you see, we need to laugh when dealing with heavy stuff. How many times do you need to hear “laughter is the best medicine” or see examples of gallows humour when we’re trying to cope with darkness? Just as Papa mixes his comedy with vulgarity or Steinbeck peppers his dialogue with left hands covered with Vasoline, in Epiphany Jones, too, the humour is key – from the dry observations to the occasional slapstick, it’s how Grothaus manages to pull you through and keep you with him. It’s how he helps lure you down into darker waters – by the time it gets real dark over the Mexico border, for example, you know you’re already in good hands –  and yet it never threatens to take away from the seriousness of just what is being exposed. It even manages to ensure that while he’s not top of the likeable list at the start of the book, the reader develops an increasing soft-spot for Jerry and will share in his devastation at the end. Indeed, don’t be fooled; when the jokes stop Grothaus can hit you with an emotional and dramatic punch like the best of them. Here, too, are occasions when you may need to put the book down to truly process what you’ve just witnessed.

Everything is in here – from gripping pace to outright shock, from murder to birth, abuse to revenge and from comedy to tragedy. Epiphany Jones is a very, very clever, tightly-knit book that delivers more depth, pacing and reading pleasure than most and an ending that leaves you with just as many questions and “now what?”s as it does conclusions. I can’t recommend it enough.

My thanks, again, to Karen at Orenda who’s selection of genre-defining novels ensures that my bookshelves and To Read pile contain brilliant books – for sending me Epiphany Jones and do check out the rest of the blogtour. 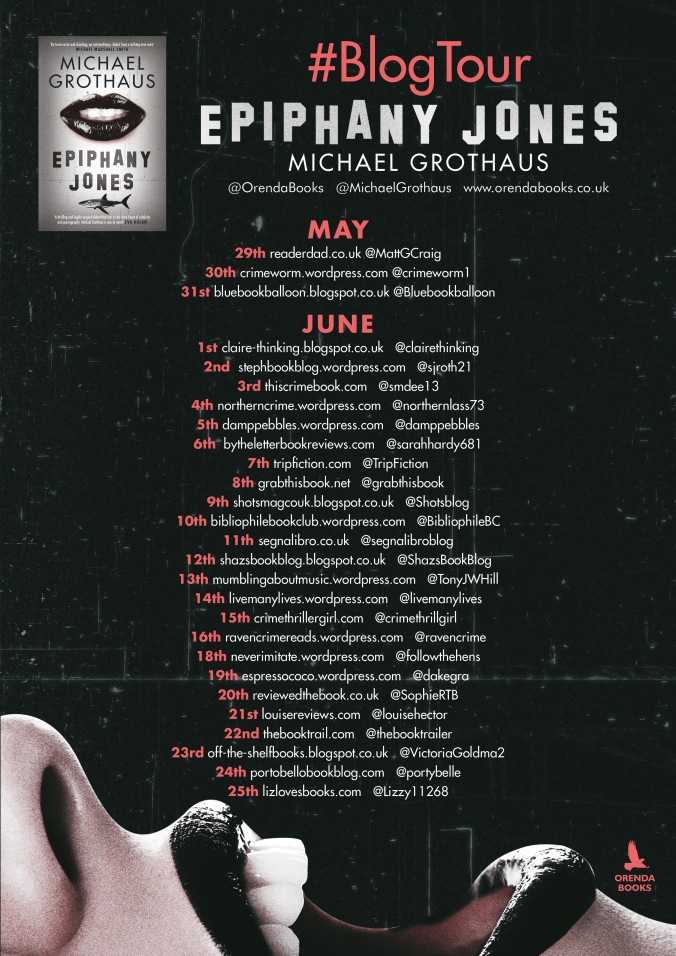