Another couple of months and another chunk is taken out of the continually growing TBR pile.

Time doesn’t appear to be my friend of late for blogging larger reviews (life takes priority) so I’m gonna try and wrap up a few of those books whose spines I cracked over the last month or so.

The Amber Shadows is a 2016 release  (it’s not all that often I read books so close to their publish date) that I found via the author’s twitter – Lucy Ribchester’s book (her second) is set in 1940’s Bletchley Park and she’d been sharing some of those once-classified documents from home of Britain’s codebreakers during World War II  that had served as research for the novel. That’s enough to get my interest. The Amber Shadows is certainly well-researched and manages to give a very convincing account of the time and place without over-doing it to the point of stereotyped clichés as some do. The plot – Honey Deschamps works in Hut 6 transcribing decrypted signals from the German Army when she begins receiving mysterious packages of amber – is certainly promising and the writer is able to keep the reader guessing. The conclusion left me a little unsatisfied but, in retrospect, it’s certainly in keeping with the period in which it’s set in terms of how, with the second world war raging and life having taken on a different value, it may well have played out. 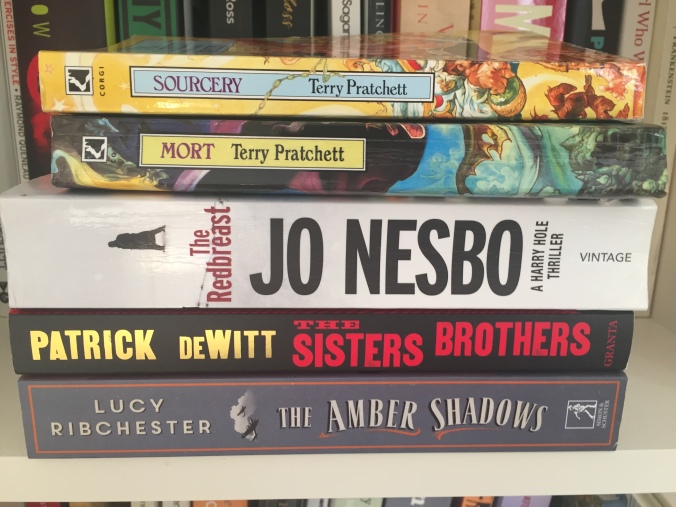 The Sisters Brothers by Patrick DeWitt had been sat on my shelves for at least a year before I picked it up at the start of the month. I’d seen it in the hands of numerous travellers a few years back on a cruise and in many a list at the time so thought nothing of grabbing it for £1.99 in Sainsburys. Though I obviously didn’t think to read it either. I can only say I was stupid. It’s a brilliant book. A real ripper that I tore through hungrily. Many a review have likened it to a noir-ish Coen brothers story and I’d happily agree. Another book I’m glad I finally got around to reading and just in time it seems as Mr DeWitt has a new book out.

Jo Nesbo’s Harry Hole is, I guess, a name that isn’t one typo away from being obscene in its native Norwegian. The Redbreast is my third Harry Hole read (well out of sequence) and fifth Nesbo novel. I was hesitant to read this after my disappointment with Head Hunters but I needn’t have been. While not as genuinely terrifying as The Snowman or quite in possession of its writer’s realised style, this third Hole novel not only works as a good stand-alone instalment but also serves up plenty of fodder for the Oslo detective to tackle in later novels and it’s a good indication as to how both the character and series develop- having now read three of which at random I do know think I’ll be better served reading them in order, though.

Reading things in order brings me to the couple of Discworld novels I re-read last month. My gradual rebuilding of my Terry Practchett collection is going nicely – I’ve also finally added and reread Men At Arms and travelled back via Guards! Guards!– if slower down to my decision to purchase and read on a less specific order than chronological. As such I’m not merely going to Waterstones and buying new (not to mention my disliking of the new cover art) but popping into used book stores and looking for specific titles – Pyramids is next on my list – or seeing what they have (there seems to be an abundance of The Hogfather). I hadn’t read either Mort or Sourcery more than the one reading I gave them at least a decade and a half ago. As such it was great to rediscover how delightfully dark the humour in Mort is and laugh as Death attempted to understand what it is to be human. I can’t, in all honesty, say quite the same for Sourcery as it took me a few false-starts to get through this one. It lacks the spark and momentum that his earlier and later novels would have and, looking at where it sits in publishing order, perhaps Sir Terry was reaching the point where he was running out of fuel for the Wizards / Witches / Rincewind stories. Indeed he’d soon branch out into other character and story arcs to populate the Disc. That’s not to say Sourcery is without its charms or humour but I’d be surprised if it was listed as anyone’s favourite of the Discworld novels.

Evening, Devon
“Now I drive my Downeaster Alexa
No trains this evening
“All that's sacred, comes from youth
“You put the cock in cocktail, man
“I know a guy who is so cheap that when he goes fishing he puts a picture of a worm on the hook”