“A book is missing.

A black gap parts the row of paperbacks, like a breath between thoughts.”

I love that opening.

Last year saw publication of Louise Beech’s How To Be Brave on Orenda Books. A thoroughly moving book that made my reads of the year list. What impressed me most was how its writer was unafraid to tackle emotional areas from which others might blanch while combining such insightful writing with a compelling story. She’s done it again.

I was more than happy and eager to read The Mountain In My Shoe when it was so kindly sent to me by Karen at Orenda. Life and this year being the utter shit that it has been, though, means I couldn’t do so straight away. My stop on the blogtour for this one was kindly populated by the author herself with a piece on adversity that’s well worth a read, here.

Now, though, I’ve not long turned the final page on this one and it’s time to get down my thoughts and I’ll try to do so without giving away too much. If I can… 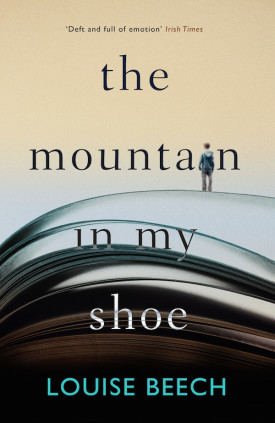 On the night Bernadette finally has the courage to tell her domineering husband that she’s leaving, he doesn’t come home. Neither does Conor, the little boy she’s befriended for the past five years. Also missing is his lifebook, the only thing that holds the answers. With the help of Conor’s foster mum, Bernadette must face her own past, her husband’s secrets and a future she never dared imagine in order to find them all.

Exquisitely written and deeply touching, The Mountain in My Shoe is both a gripping psychological thriller and a powerful and emotive examination of the meaning of family … and just how far we’re willing to go for the people we love.”

I seem to recall Louise Beech saying that in The Mountain In My Shoe she’d ‘accidentally’ written a thriller. If this is an accident then I’d be first in line to see what happens were she to set out to do so. I was thoroughly gripped and found myself turning through the pages with a speed that ought to have worried the binding. Contained within is a book that encompasses psychological thriller, emotional drama and gripping mystery.

As with How To Be Brave, there’s more than one voice telling a story in The Mountain In My Shoe: Bernadette, an abused housewife on the verge of leaving her controlling husband; Connor, a young boy who’s spent his life in the care system and The Book – Connor’s ‘life book’. The Life Book is Connor’s story updated by those that care for him – foster parents, social workers, teachers. I found this exceptionally moving – having just rediscovered my young son’s ‘My Story’ type book after moving and realising that, for Connor (and so many like him) life can deal some pretty harsh cards. A masterful touch from Mrs Beech.

The changing narratives and perspectives add a great depth to the story and each are handled convincingly and ring true. The Book is especially moving, upping the empathy for Connor and the suspense. It makes for painful reading at times but I’ve said this before and I’ll no doubt say it again; woe betide the author that goes for comfortable.

How To Be Brave and The Mountain In My Shoe are very different books and while there’s a few similarities (a diary and lifebook as narrative devices), there’s one undeniable thing they have in common; Louise Beech writes with an emotional honesty and bravery that elevates her work from the crowd. She writes in a way that just manages to cut to the core – especially as a parent – every single time. Brilliant.

Worth the wait, very highly recommended and thanks again to Karen at Orenda for another great book. Seriously, though, Karen; every time I think I’ve got my ‘Top Reads of the Year’ list sorted I open another book with the Orenda logo on its spine.

One thought on “Book Review: The Mountain In My Shoe by Louise Beech”