From The PR: “1997. Scarclaw Fell. The body of teenager Tom Jeffries is found at an outward bound centre. Verdict? Misadventure. But not everyone is convinced. And the truth of what happened in the beautiful but eerie fell is locked in the memories of the tight-knit group of friends who took that fateful trip, and the flimsy testimony of those living nearby.
2017.

Enter elusive investigative journalist Scott King, whose podcast examinations of complicated cases have rivalled the success of Serial, with his concealed identity making him a cult internet figure. In a series of six interviews, King attempts to work out how the dynamics of a group of idle teenagers conspired with the sinister legends surrounding the fell to result in Jeffries’ mysterious death. And who’s to blame…

As every interview unveils a new revelation, you’ll be forced to work out for yourself how Tom Jeffries died, and who is telling the truth.”

Right then, here we are with Six Stories, one of the most interesting books I’ve read in a while with something of a unique narrative approach – like a contemporary take on The Moonstone‘s multi-character narrative. One unsolved crime, six key stories as told, judgement free, to Scott King on his podcast  with listeners being left to form their own views on what happened – that’s the premise of ‘Six Stories’.  Six Stories, told as though an episode of said podcast, unravels the mystery of what happened to 15 year old Tom Jeffries who went missing one night on Scarclaw Fell before his body was discovered a year later.

Twenty years ago the death Jeffries had been ruled as ‘misadventure’ – his body having been eventually discovered in the mud of the Fell one night by Harry Saint Clemeny- Ramsay (who also adds a narrative thread in between the Six Stories) and his friends’ dogs  – but then what were Harry and his friends really doing out in the wild with their dogs, lamps and guns? Hunting? For what? Why had the body been missing for so long despite thorough searches at the time?

As each of the six stories unfolds we’re treated to more questions and intrigue, more revelations and head scratchers – thankfully ‘Scott King’ provides plenty of recaps and additional voices, corroborations from those outside the ‘six’ – for Six Stories is most definitely a very meticulously plotted and tightly wrapped story. Deeply engrossing and one that cost plenty of sleep – there’s so much here that made me flip back in the book to re-read earlier threads and some genuinely chilling moments that are capable of raising the odd goosebump or three and once you’ve gotten into the swing of the style it’s impossible to finish reading one ‘story’ and not want to plough straight into the next one to see what that character brings to the mix.

Those characters are all brilliantly written and their stories all so comprehensively well delivered – the multi-angle and narrator approach really keeps things rocking and gives adage to the notion that not every story is one-sided and events become increasingly detailed and multi-faceted with every witness’ version of events, though I will say these were either a pretty precocious bunch of 15-year-olds or I lived a sheltered existence. It’s strange but after you get into it – the first two ‘stories’ are not from any of the then-teenagers –  you really want to see how the Rangers have aged, what they’re like now after reading so much of what they were like then.

It’s hard to talk too much about Six Stories and its narrative style and how it goes on to deliver in spades without dropping an almighty spoiler but I will say that the final story and its revelation is an absolute belter and written / handled in such an accomplished manner as to leave the reader in no doubt that Matt Wesolowski is a  very much a  talent to keep an eye on.

Six Stories is a compelling and rewarding read with enough intrigue and mystery to keep you glued to the end. Thanks again to Karen at Orenda for my copy and do check out the other stops on the Blog Tour: 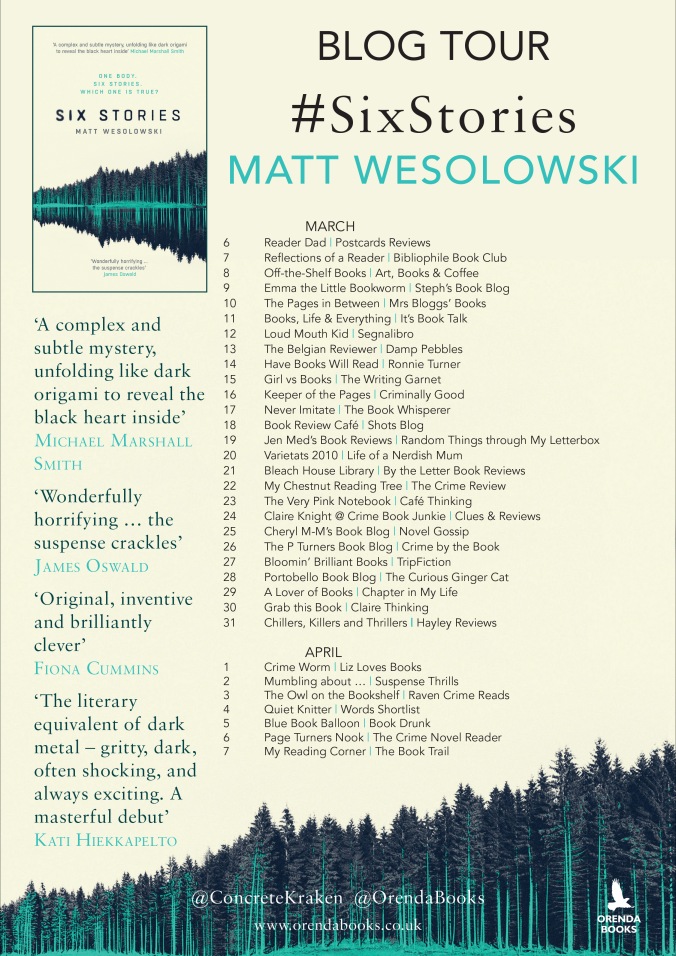