From the PR: “Reeling from the attempts on his life and that of his family, Police Inspector Robert Finlay returns to work to discover that any hope of a peaceful existence has been dashed. Assigned to investigate the Eastern European sex-slave industry just as a key witness is murdered. Finlay, along with his new partner Nina Brasov, finds himself facing a ruthless criminal gang, determined to keep control of the traffic of people into the UK.

On the home front, Finlay’s efforts to protect his wife and child may have been in vain, as an MI5 protection officer uncovers a covert secret service operation that threatens them all… Picking up where the bestselling Wicked Game left off, Deadly Game sees Matt Johnson’s damaged hero fighting on two fronts. Aided by new allies, he must not only protect his family but save a colleague from an unseen enemy … and a shocking fate.”

Crikey; it seems like only yesterday that I was reviewing Matt Johnson’s debut Wicked Game and stating that its author “has a very real talent and gift for thriller writing”. It was actually a year (and a day) ago whereas yesterday I turned the final page on the follow up; Deadly Game. And it’s a bloody good ‘un.

One thing that’s sure is that Matt Johnson knows what he’s talking about and writes with demonstrable knowledge when it comes to the details of both procedure and action, clearly writing from experience – lending a real sense of weight and reality to proceedings that’s all too often missing in the rush for action and flash.

Which segues nicely into another element of Deadly Game I enjoyed; the aftermath of events of the previous novel. It’s fairly common practice for lead characters to brush off explosive and violent occurrences like they were getting over an allergy. Not so here. Anyone who’s got any experience with trauma will tell you just what a fucker PTSD is and how you don’t just ‘get over it.’ Again writing from experience, Matt Johnson does a brilliant job of detailing Finlay’s struggles  – giving a thoughtful and insightful portrayal without turning it into a Psych 101 lesson like someone who looked it up on Wikipedia.

As skilled as he is when it comes to the procedurals and details, Matt Johnson is very much a talented thriller writer – and it’s when the gears shift and the pace quickens that he and Deadly Game really come into their own and the action scenes rip along with a real confidence and skill. The MI5/MI6 story line is especially well written and plotted too, the interweaving, long-game of that particular plot and the manner in which Johnson ties it into events of the previous novel proved a real highlight for me. It also suggests there’s more to come as, though perhaps it’s just me, I couldn’t help thinking that there a couple of loose ends with potential to grow further in another installment.

Upping the ante from Wicked Game and delivering a serious slab of a thriller, Matt Johnson’s Deadly Game is a blistering read well worth picking up.

Another great book from Orenda and a big thanks, again to Karen for my copy and do check out the other stops. 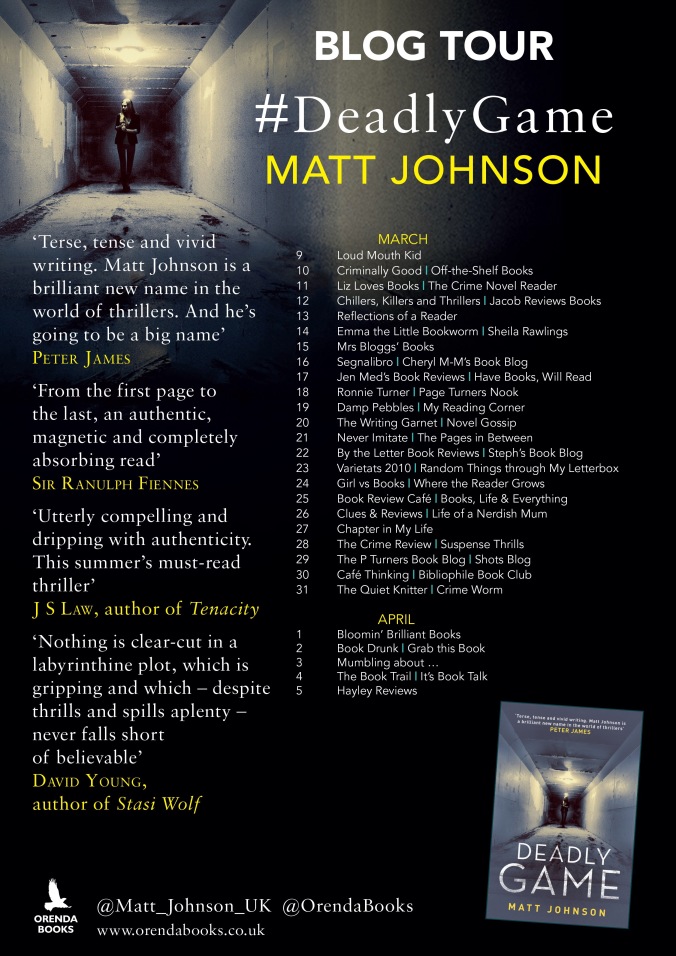