See the tuna fleets clearing the sea out? Yeah, great. See the Bedouin fires at night? You do, cool. Now look at the stars, see how they shine for you? It’s 2000; the year that was for the ones who stood their ground, for Tommy and Gina who never backed down. It was the year LeAnn Rimes couldn’t fight the moonlight, Linkin Park were one step closer to the shape of the Backstreet Boys’ heart, Limp Bizkit wanted us to take a look around – probably because someone let the dogs out (though Shaggy assured us it wasn’t him) – and Eminem wrote us even if we still ain’t callin.

Lesson one of 2000: there was no millennium bug.

So, 2000: Prince saw in the new year by playing what he promised would be the last performance of ‘1999’ and Sharon Osborne promptly quit after three months as the Smashing Pumpkins’ manager “for medical reasons: Billy Corgan was making me sick.” Nice. It was also the year that CD sales reached their peak, apparently, with sales declining yearly ever since. In an effort to stop the rise of the alternative – downloads and mp3s – Metallica decided to sue Napster.

Rage Against The Machine were petering out – bass player Tim Commerford was arrested for climbing onstage at the MTV VMAs when their ‘Sleep Now In The Fire’ video lost out to Limp Bizkit. Apparently he was ‘just bored’ of the show. Not to worry though – NSYNC performed ‘Bye Bye Bye’.  A month or so later Zach De La Rocha left RATM, he said the band’s “decision making process” had completely failed. They’d be back but they got out just in time – their bastard spawn genre ‘nu metal’ was making bands like Limp Bizkit, Papa Roach and Mudvayne monstrously dominant.

Ben Folds Five, Candlebox, Sceaming Trees and Smashing Pumpkins all joined Rage Against The Machine in calling it a day in 2000.

I think I did my bit for CD sales in 2000 – I was at university and doing the sensible and responsible thing of spending big chunks of my student loan instalments at the multitude of music shops in Canterbury at the time. So what’s worth grabbing from the stack from the start of the new millennium?

It was double-bubble from at least two bands in 2000. The Smashing Pumpkins graced us with two instalments of their ‘Machina’ albums: Machina / The Machines of God and Machina II/The Friends & Enemies of Modern Music with the first released traditionally and the latter – a double album packaged with 3 eps full of b-sides and alternative versions – released online only after plans for a physical release got buggered by legal wranglings. Both are better in retrospect than I remember but Machina / The Machines of God was definitely the strongest and stronger than Adore for my money.

The other double came from Everclear who released their two-parts of the same concept Songs From An American Movie Vol One:  Learning How To Smile and Songs from an American Movie Vol. Two: Good Time for a Bad Attitude some four months or so apart. Another lesson in how one good album was sacrificed for the sake of two ‘ok’ albums it also pretty much killed off the original run of the band thanks to the fact that the band and label were still promoting Vol One when the second was released and songs from Vol Two were used in films so were then added back as bonus tracks to Vol One… it was a mess that meant both albums stalled and the band kinda stalled with em.

Then again… one of two albums recorded at the same time, Radiohead’s Kid A was released in 2000. Wisely decided the material would be too dense if served up as a double, the sound of Kid A were a massive leap in a ‘definitely not OK Computer Part 2 direction. More samples, more loops, more processed guitars and disjointed lyrics. Having nearly been broken by the strain of touring and promoting OK Computer (see ‘Meeting People Is Easy’), Radiohead took a leaf out of Pearl Jam’s book and said ‘no’ a lot more: no singles, no videos, minimal promotion and photos. Garnering a massively mixed reception at the time, if you ask me: Kid A is a fucking triumph:

The Go-Betweens released their first album in 12 years, The Friends of Rachel Worth and Cat Power’s The Covers Record gave Chan Marshall a reprieve from the pressure of following up Moon Pix as she added her unique take on a series of classics from the Rolling Stones, Bob Dylan, Lou Reed and more.

2000 was another great year for the growing post-rock genre with the debut from Explosions In The Sky How Strange Innocence arriving – one of last year’s finest re-releases – along with Godspeed You! Black Emperor’s astonishing masterpiece Lift Your Skinny Fists Like Antennas To Heaven. Not content with releasing one of the genre’s finest albums to this day, some of Godpseed’s members kickstarted a new band, A Silver Mt Zion (now having swapped ‘A’ for ‘Thee’) with the release of another great album; He Has Left Us Alone but Shafts of Light Sometimes Grace the Corner of Our Rooms…

Things were happening out in Nebraska – Omaha based label Wichita was at the forefront of another ‘scene’ with releases in 2000 including Cursive’s Domestica and Bright Eyes’ Fevers and Mirrors. I listened to both again recently and it’s now Cursive’s that holds up stronger.

Warren Zevon figured Life’ll Kill Ya in 2000 – a return to new music and form – released just a couple of years before Zevon was diagnosed with mesothelioma. Aimee Mann released Bachelor No 2 and PJ Harvey gave us Stories From The City, Stories From the Sea.  One that I found via ‘The Sopranos’ from 2000 and still enjoy is Kasey Chambers’ The Captain.

The Cure’s Bloodflowers was a real strong effort as was Eel’s Daisies of the Galaxy and Death Cab For Cutie’s We Have The Facts and We’re Voting Yes.  Elliott released their album False Cathedrals in 2000. A band born of Slowdive, Mojave 3 released Excuses For Travellers and one of the most famous duos in music, The White Stripes dropped their second effort De Stijl. There were great albums to be found at the heavier end of the shelves with A Perfect Circle’s Mer De Noms, Queens of the Stone Age’s Rated R with its famous shopping list of drugs and the phenomenal Relationship of Command by At The Drive-In.

Two big guns in my collection released strong efforts in 2000: Pearl Jam released their much-overlooked Binaural, their first effort with a new producer after an amazing four-album run with Brendan O’Brien. But I’ve already covered that a couple of times. Sonic Youth released a similarly much-overlooked album: NYC Ghosts and Flowers. In 1999 a huge amount of the band’s gear – including guitars and effects pedals – was stolen in the middle of the night while they were on tour in California. Pretty much having to start from scratch after years of building up effects and tunings, NYC Ghosts and Flowers is a much more experimental album than expected and has aged really well. Oddly enough they’d join Pearl Jam for the start of the Binaural tour in 2000. By 2012 they’d managed to recover 8 of the guitars which were stolen.

Modest Mouse released an absolute classic with The Moon & Antartica, Coldplay arrived with Parachutes, Placebo began the climb down after two amazing albums with the ‘it’s ok’ Black Market Music and Jets to Brazil released another brilliant album with Four Cornered Night.

It’s interesting just how big a sway less than amazing feedback can have on artists used to being covered in praise. Take the reaction to Lucky Town and Human Touch – it pushed Springsteen’s confidence back so much he barely released anything else for the decade despite working a couple of albums’ worth of material in that time. On the plus side it drove him back to the E Street Band and the reunion tour that was still underway in 2000. Then there’s U2 – the response to Pop was such that the band pulled back on the experimentation and released a ‘Best Of’ of their first decade then chose 2000 for a ‘comeback’ with All That You Can’t Leave Behind. Songs like ‘Beautiful Day’ and ‘Stuck In A Moment That You Can’t Get Out Of’ helped it leap up to monster figures and drive them back to the adulation they’d grown accustomed to but listening back to it, it’s not aged as well and now as then I find it more ‘twee’ and too singular in its approach, like they were scared to give anything any of that bite they’d discovered in time for the 90s. They’d find it again by the next album though.

Speaking of comebacks, after a four year break taken up with soundtrack work, Mark Knopfler released Sailing to Philadelphia in 2000. Managing to both break away from yoke of Dire Straits while also recall some of its finer moments, Sailing to Philadelphia was probably the last time MK”s solo work received such attention, while Golden Heart found him wavering in direction, as if he was expecting to find the same level of success,  this one sounds a lot more relaxed and confident in its boots and managed to set the template for what his solo work would be for a while to come and it’s a bloody solid album too. 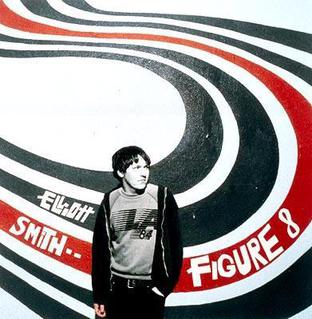 You know, I listened to this again in its entirety yesterday. And probably a week or so before that too and goodness knows how many times since Elliott Smith released what would be his final album in April 2000. Listening to it now is not only a reminder of what a joyously great album it is but also a kick in the balls as it’s such a crying fucking shame that he’s no longer with us.

But back to the album. Between XO and Figure 8 Elliott Smith had moved from Brooklyn to LA where he’d play regular intimate and acoustic shows in bars around the Silver Lake area. You’d be forgiven then for thinking his next album would be a return to his former hushed sounds but then there’s a cover of the Beatles’  ‘Because’ that appeared on the ‘American Beauty’ (can anyone watch Kevin Spacey in that now?) soundtrack that was a better indication – Figure 8 is Smith’s lushest, most fully-fleshed sounding record with a big ‘Fab Four’ influence in its arrangements, instruments and textures while unmistakably Elliott Smith.

There’s something so much more…. positive and upbeat to Figure 8. It’s not as strong as XO but it’s a definite progression in sound and Smith’s writing was going from strength to strength. Listening to it I get the feeling he was really having fun in the studio and being able to build up his songs into these great arrangements, I’m sure that upset people who only wanted their Elliott Smith records to feature an acoustic guitar, but there’s so much to love about the sound of Figure 8.

It got in early but Figure 8 is one of the best albums of the 2000s, it’s both enjoyable and accessible while rewarding on multiple listens with so many little hidden elements that can be missed at first.