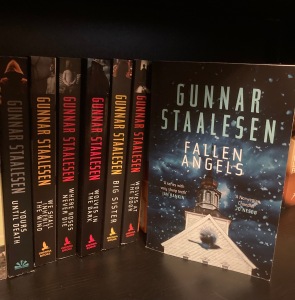 From the PR: “When Bergen PI Varg Veum finds himself at the funeral of a former classmate on a sleet-grey December afternoon, he’s unexpectedly reunited with his old friend Jakob – guitarist of the once-famous 1960s rock band The Harpers – and his estranged wife, Rebecca, Veum’s first love.

Their rekindled friendship is thrown into jeopardy by the discovery of a horrific murder, and Veum is forced to dig deep into his own adolescence and his darkest memories, to find a motive … and a killer.

Tense, vivid and deeply unsettling, Fallen Angels is the spellbinding, award-winning thriller that secured Gunnar Staalesen’s reputation as one of the world’s foremost crime writers.”

Okay, no preamble here let’s get straight to to the facts: Gunnar Staalesen is on a different level, an all-time great of of Nordic Noir and Fallen Angels is an astonishingly good novel that’s a shoe-in for the best read of 2020.

This is the seventh Staalesen novel I’ve read though is, in fact, the eighth Varg Veum book, originally published in Norway in 1989. Published now in English for the first time by the powerhouse and champion of great literature, Orenda Books, Fallen Angels won multiple awards upon release and was the novel that gave Staalesen his reputation as the father of the genre. Before there was Harry Hole or Kurt Wallander, before Inspector Van Veeteren or Mikael Blomkvis, Varg Veum was cracking complex and disturbing cases and Gunnar Staalesen was perfecting a style that’s about as good as it gets in literature.

Fallen Angels is a vital component to the Varg Veum series,  both revealing a great deal about the Bergen investigator’s past while unravelling a chain of deception that will leave its mark on him for years to come.  It’s as hard-hitting and powerful as they get when it comes to the key to the killings and there’s nobody who can wind up to a gut-punch that leaves you on your knees like Staalesen. This one hits harder than any I’ve read for some time.

The denouements in Gunnar Staalesen’s novels have never been anything less than knockout , you’re in the hands of a real master of the form here; every strand of the novel tying together and leading you through a beautifully crafted and increasingly intricate plot that doesn’t feel the need to rush or throw in the kitchen sink before delivering that final piece.

Reading a Varg Veum novel is always a real joy that I genuinely look forward to. Staalesen’s writing style and Varg’s methods are worth savouring every word, not a single on of which  ever wasted. There’s a preciseness to his writing that’s deceptive because it takes a real skill to deliver something as rich and involved with an economy of words and Staalesen is just so incredibly talented it makes anyone who wrestles with the written word on the daily envious.

Varg Veum is one of those rare protagonists that I can’t get enough of. He’s an honest, yet flawed character with a moral compass that points true north and is driven by the right motivations, even when he’s not on the clock. There’s a real charm to Veum as a lead in a mystery, his is  technique and style that’s compelling and his propensity for getting into more than his share of scapes in his determination to pick at threads people would rather leave buried makes for great reading. Combine that with a cast of equally compelling characters, a hugely complex plot, a good mix of humour, plenty of music references and plain brilliant prose and you’ve got a great book in your hands.

Fallen Angels is a slow-burning delight that packs an almighty punch. Expertly written and massively addictive. I cannot praise it enough. My thanks to Orenda for keeping my Guunar Staalesen addiction fed and to Anne Cater for inviting me to take part in its blog tour. One thought on “Fallen Angels by Gunnar Staalesen”