Careful; the smallest whiff of a spoiler is contained fleetingly herein.

If you’d asked me a couple of weeks ago what I associate with that country I’d have suggested a few bands like Sigur Rós, múm, Of Monsters and Men, Olafur Arnalds and that woman called Björk , Reykjavik 101, unpronounceable (by me) volcanoes and geysers. Oh, and the chap who sang “Ég á líf” at Eurovision a couple of years ago.

If you ask me the same question today I’ll add fjords, the herring boom, and great Nordic crime fiction to that list.

For in the last week I had the utmost pleasure of reading Snowblind by Ragnar Jónasson.

The fist novel in Ragnar Jónasson’s Dark Iceland series – almost up to its sixth installment in Iceland – has now been translated into and published in English by Orenda Books. 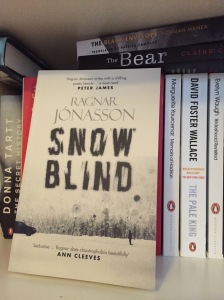 Snowblind introduces us to Ari Thor Arason – finishing his police training (after starting and dropping other pursuits including Theology) on-the-job having spontaneously accepted a posting in the northern town of Siglufjörður. It’s a posting that takes him hundreds of kilometres away from his home, his partner and his comfort zone. Plunging him into a small town where things aren’t quite as tranquil as they seem and a killer is on the loose.

Quiet and remote, Siglufjörður is a small fishing town only accessible via perilous mountain roads and a small tunnel seemingly carved out of the rock without a millimetre of excess width for as Ari Thor takes his first journey through the sense of a trap being sealed begins to sneak in – “it was a narrow single track…. carved through the mountainside more than forty years ago” with water dripping in the darkness from a ceiling unseen. Even on the other side the weather is starting to turn grim and oppressive (“every winter is a heavy winter in Siglufjörður”).

Still, what could go wrong?  Siglufjörður is an idyllic little community set amongst the mountains and fjord where – according to Police Inspector Tomas “nothing ever happens”.

Nothing that is except murders, manslaughter, literary theft, adultery, fugitives in hiding, drunk locals stumbling into the wrong house at night and seemingly not a character in the story without a history of loss and tragedy and, of course, the politics of local am-dram.

Having visited such small towns at the foot of a fjord (albeit in Norway not Iceland) in summer when the majesty of the scenery will steal your breath, I often wondered how different those imposing mountains would be when winter sets in and the calm of such detached living is replaced by a sense of being cut-off and encircled by thousands of metres of impenetrable nature. I need wonder no more; Ragnar Jónasson perfectly creates an atmosphere of dense, stifling claustrophobia, an impenetrable trap tightening with every falling flake, using geology to form a locked-room style setting with the imposing mountains and heavy snow falling in like a heavy, stifling blanket:

Claustrophobia had sneaked up on him, a feeling that had deepened as the snowfall around the station had become increasingly heavy. It was as if the weather gods were trying to construct a wall around the building that he would never be able to break through. He saw things around him grow dim and suddenly he found himself fighting for his breath. 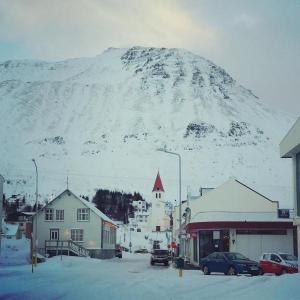 The fact that Ari Thor – like the reader – is the only one not used to such environs deftly adds to the fish-out-of-water feeling, almost a “am I the only sane person here?” element adding to the tension.

Just as the winter snow falls gently at first but builds, the plot unfolds slowly; each of the character arcs expanding at their own pace, gently but intractably linking to each other and interspersed with snippets of a knife-point burglary so obviously doomed to a bad end that no matter how tranquil that which follows may be, a sense of foreboding and danger pervades.

For a debut novel, Snowblind is startlingly confident and sure-footed. The characters and dialogue all ring true, the plot is original and packed with plenty a surprise. Perhaps most pleasingly of all, Jónasson steers clear of hackneyed plot devices and reveals; while Ari Thor possess a talent for his work he’s no ‘instant wonder / super cop’ – in fact his inexperience lands him in a very dangerous position as he enthusiastically blunders into a confrontation with a killer, preventing any real chance of justice being served and only solves the novels main “who dunnit” by chance.

It’s clear that Ari Thor is a character that has plenty of space and potential to grow and that the sequel is currently in-translation by Quentin Bates (who deserves very positive praise for his translation of Snowblind) can only be considered great news. The first sliver of NightBlind is enough to have me hooked while confirming that Ragnar Jónasson is a writer with plenty more up his sleeve.

From it’s opening prelude, Snowblind steps back a couple of months to put the pieces in place, then assuredly and calmly expands into a compelling thriller that keeps you gripped throughout and delivers a final 1-2-3 punch of revelations that will leave your gob on the floor.

Get a hold of a copy today and check out the other stops on the blog tour.

One thought on “Nothing Ever Happens Around Here”