The Rock and Roll Hall of Fame is a strange thing. From where I sit it seems like a lot of back-slapping and congratulating from industry-types with very little real merit. Does it mean something to be a “Hall of Famer”? Does it add all that much credence anymore? Perhaps it means more in the States than it does here where a UK Music Hall of Fame sputtered, stalled and stopped before anyone paid it any attention.

Let’s spin back a bit to 1983; the Rock and Roll Hall of Fame was set up by Ahmet Ertegun (he of Atlantic Records) to “recognize and archive the history of the best-known and most influential artists, producers, engineers, and other notable figures, who have each had some major influence on the development of rock and roll” (Wikipedia) and began inducting such artists in 1986 with the first group of artists including Elvis Presley, Sam Cooke and Chuck Berry.

Since then each year a group of artists are nominated, voted for and inducted in a ceremony – again; from where I sit – that seems overly long on speeches and pretty short on the ‘rock and roll’. With each year there’s criticisms about who is and isn’t nominated (chief amongst which being that those controlling nominations, as a small group, are not musicians and nominate based on personal taste) and then there’s plenty of column inches and website debate and pages handed over to the ‘drama’ of which members from a certain band will be inducted, will attend, will tell the HoF to shove it…

From those Bozos in Makeup to Axl Rose’s tantrums, the question about which ex-members should be in alongside the nominees seems to draw more debate than discussing that band’s lasting impact. The cynical side of me (which seems to only get more so after a decade in marketing) certainly thinks that this is a deliberate act by the HoF in order to stir the pot, get more attention and create more buzz than the ceremony would otherwise get, nominating bands for whom the real question will be “will they induct that member who played tambourine on their first album or…?” 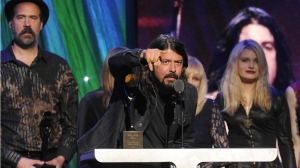 Nirvana had it in 2014 when those members inducted included Dave Grohl and not the four drummers that had sat on the stool pre-Nevermind. Would they induct Chad Channing or the first drummer, Aaron Burckhard? For, you see, there’s a criteria for getting in: “artists will first become eligible for the Rock Hall 25 years after the release of their first record (LP, EP or single)”. Bleach was released in 1989 (with Chad Channing on drums and Jason Everman on guitar*) but Nevermind, the first record Grohl drummed on, came out in 1991. It really adds weight to the idea that the HoF is after the popular vote more than anything – everyone loves a bit of Dave Grohl, nobody knows who Chad Channing is. There was, of course, a lot of online hubbub about the ‘snub’ of Chad.

Being the perennially nice guy of rock that he is, of course, Dave praised those drummers that had hit the skins before him in his speech and the band invited Channing to attend.

This year that question and the online buzz falls upon the collective shoulders of Pearl Jam. A band with a huge and dedicated following who forged a path for many to follow. Few can touch them live or match their unique set lists and they’re certainly the last men standing when it comes to the ‘Seattle Scene’. Their place in the Hall, even in the first year of eligibility, isn’t likely to be questioned. They’re also a band who, for the first half of their career, had a Spinal Tap scenario with their drummers**.

Released in August 1991, Ten featured Eddie Vedder, Stone Gossard, Mike McCready, Jeff Ament and, on drums, Dave Krusen. Krusen, though, had left the band in May due to alcoholism. His replacement, Matt Chamberlain only hung around for a handful of shows before heading off to join the SNL band. He suggested a guy to take his place; Dave Abbruzzese. Abbruzzese played drums through the rest of the tour supporting Ten, on Vs. and Vitalogy before he was fired in 1994.  During which time the band would tour extensively, Abbruzzese would write the music for ‘Go’, ‘Last Exit’ and ‘Angel’ and defined the band’s sound at the time with his ferocious drumming. The harder sound he bought helped them move away from being pigeon-holed as another clone.

If you ask a Pearl Jam fan what the band’s ‘peak’ period was I’m willing to lay money on a large percentage saying 1991-1994. Abbruzzesse was a key part of that sound. The problem is, he enjoyed it too much. I’m not talking piles of cocaine and claims of being a Golden God, no; he just loved it all and smiled too much. Rumours swirl as to why Abbruzzesse was actually let go but it boils down to the fact that he was obviously having fun. Vedder was, at this time, at his most serious and ‘punk’, it wasn’t ‘cool’ to be enjoying your success and, as the front man, he took most of the attention and it was a lot to handle. While the band withdrew from the spotlight, Dave would give interviews (albeit to drum magazines, not Spin or Rolling Stone). While the other members would go the Volvo or battered old truck route, Dave bought a Lexus. He didn’t really care about the famous Ticket Master Boycott either. Apparently the final straw for Dave’s tenure came when he accidentally broke the neck of one of Vedder’s guitars during Vitalogy sessions and didn’t hang around to tell Eddie or apologise. He wouldn’t be in the band when it came time to tour the album he’d helped create, he was let go – Vedder wouldn’t do it, the task fell to Stone Gossard. 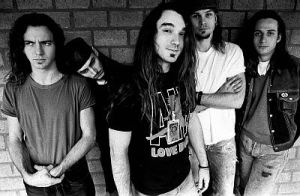 Jack Irons, formerly of the Red Hot Chili Peppers*** was then in the saddle for four years and two albums before he ducked out (not happy with touring) in 1998 and then-former Soundgarden drummer Matt Cameron took the seat he still occupies. Now, Cameron is certainly the stick man with the longest tenure and its clear that he’s considered a full member of the band – Vedder continues to praise him and has credited his joining with keeping them together – but I don’t think I’m alone in seeing him as an outsider even some 19 years and five albums later.

Now of all their six drummers, only one, technically, qualifies: Dave Krusen. He played on Ten, twenty-five years ago. By all accounts he’s quite surprised at the nod. The Rock and Roll Hall of Fame, however, is also inducting Matt Cameron. And nobody from the period between the two.

Now, out-dated and bloated an institution as it may be, if the Rock and Roll Hall of Fame are recognising Matt Cameron then they sure as shit should recognise Dave Abbruzzese.  As much of a deliberate poking of a hornet’s nest as the snub is, it’s also pretty unfair to then place the onus of dealing with the question onto Pearl Jam (ever-shy of such publicity and awards) to be the ones to deal with it. Dave, obviously riled himself, has said plenty, chiefly:

“I have always thought that every award given to a band that celebrates the bands lifetime achievements should be awarded to every person that was ever a debt incurring, life sacrificing, blood spilling, member of that band. Maybe the Hall should reevaluate the need to put all the monkeys in the same cage in order to boost revenue, and instead let the history of the band be fully and completely represented as they were and as they are. …leave it up to the group to show their true colors as they celebrate their own history in a manner of their choosing…

I will admit to wanting to look out over my drum kit at the faces of Jeff, Stone, Mike and Eddie. Looking to my left at my drum tech, the mainest of mellow, Mr. Jimmy Shoaf and seeing him give me that look that dares me to destroy my cymbals and kick the songs ass, the bands ass and the crowds ass… The idea of counting it off and giving the band, the music & the people all that I have to give, as I always have without compromise or hesitation… The sound of the people singing along… Making eye contact with the person air drumming their ass off right before the big drum fill, so we can do it together…
I loved it.
I loved it every single time.”

Pearl Jam have always marked themselves out as a band of integrity and honest values. They’re continually raising money and awareness for important causes and fighting the good fight. Again, it’s unfair of the HoF to put this on them but it is gonna be down to them to decide how to deal with the Dave question. History gives no real clue – their 2004 compilation Rearviewmirror featured photos cropped not to include him yet in 2016 the band performed his composition ‘Angel’ for the first time since 1994 with Vedder stating it ” was written by the guy who was our drummer. Dave Abbruzzese, We wish him well.”

How it’s dealt with come the night, though, we’ll have to see. And that’s how the Rock and Roll Hall of Fame keeps getting people to pay attention. And, damn it, they’ve suckered me in to giving a damn too. The rat bastards.

* albeit in name only and his image was ‘tastefully’ removed from the album cover come the 20th Anniversary re-release. Everman would go through a musical life of ups and downs which would include a blink-and-you’ll-miss-it stint on bass for Soundgarden before cutting his hair and joining the army where he would serve with the Rangers and Special Forces – it makes for a fascinating read.

“Well maybe you’ll be out there on that road somewhere,
“I got this feeling, I can't keep it down anymore
“Johnny works in a factory and Billy works downtown
“No time, no place to talk about the weather...”
Monday morning mud and Mogwai.
“A coffee machine that needs some fixing, in a little café just around the bend”