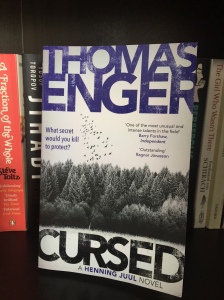 From the PR: “When Hedda Hellberg fails to return from a retreat in Italy, where she has been grieving for her recently dead father, her husband discovers that his wife’s life is tangled in mystery. Hedda never left Oslo, the retreat has no record of her and, what’s more, she appears to be connected to the death of an old man, gunned down on the first day of the hunting season in the depths of the Swedish forests. Henning Juul becomes involved in the case when his ex-­‐wife joins in the search for the missing woman, and the estranged pair find themselves enmeshed both in the murky secrets of one of Sweden’s wealthiest families, and in the painful truths surrounding the death of their own son. With the loss of his son to deal with, as well as threats to his own life and to that of his ex-­‐wife, Juul is prepared to risk everything to uncover a sinister maze of secrets that ultimately leads to the dark heart of European history. ”

“It’s like having a gun to your head”, being a dad, according to Henning Juul: “You go around being frightened the whole time. Frightened that something might happen… And you think that all the awful stuff you read about in the papers – it won’t happen to you and your child; it only happens to other people’s kids.” Juul, you see, is living every parent’s nightmare – his son was killed. As Henning and his son slept the apartment they were in was set alight as a warning – Juul’s investigations having come too close to some presumably powerful and truly nasty people. All of which, I understand (and please correct me if I’m wrong) happened before the events of the first Henning Juul novel, Burned.

So here we are with Cursed, the fourth entry in the Henning Juul series and it’s an absolute belter that cost me a fair bit of sleep in my reluctance to put it down. I’ve not read the previous novels in this series but I never felt that I was lost or missing anything for having not yet done so (only that I now need to go back and start at the beginning as this was such a good read) as Thomas Enger does a great job of bringing you up to speed without being heavy handed.

As Juul continues to search for the man who set alight his apartment and delve deeper into Oslo’s dark underbelly with some memorable scenes and characters, his ex-wife Nora is asked to investigate the disappearance of Hedda Helberg.

Having discovered the motivations and back story behind Juul’s investigations I honesty didn’t expect Nora’s case to be able to compete in terms of either drama or grip, but then I do like to be surprised by a book and the supposed missing-person case of Hedda Helberg soon becomes just as demanding of attention as slowly but surely a web of deceit and lies surrounding one of Norway’s wealthiest families is pulled apart.

Both of these investigations and narratives have the slow-burning, intricate and meticulous plotting that I so enjoy in a good thriller and that the two gradually become linked as they gather both pace and intrigue mean there’s zero chance of putting it down. The switch between narrative focuses proving a great device as it allows for a fuller view of each of the characters.

It’s hard to read Cursed and not be moved by the loss that Nora and Henning have endured while also noticing the difference between the two characters and how the death of their son has affected them both. Nora slowly but surely moving forward in life, back to work and in a new relationship, all the while carrying a ball that their son played with in her bag. Juul – presumably blaming himself in many a way – is  driven by nothing but finding justice for his son, his entire being devoted to the cause. The tragic and heartbreaking (seriously where is the Orenda Gut Check warning on this one?) back story makes this novel all the more compelling.

Cursed just about has the lot; intrigue from the off,  tightly weaved plots that pull you right in, plenty of twists, gritty and scarred lead characters and enough emotional heft and resonance to floor come the final reveal – all underpinned by a back story and over-riding story arc that ensures the Henning Juul series demands attention.

Many thanks to Karen at Orenda for my copy and do check out the other stops on the Cursed Blog Tour. 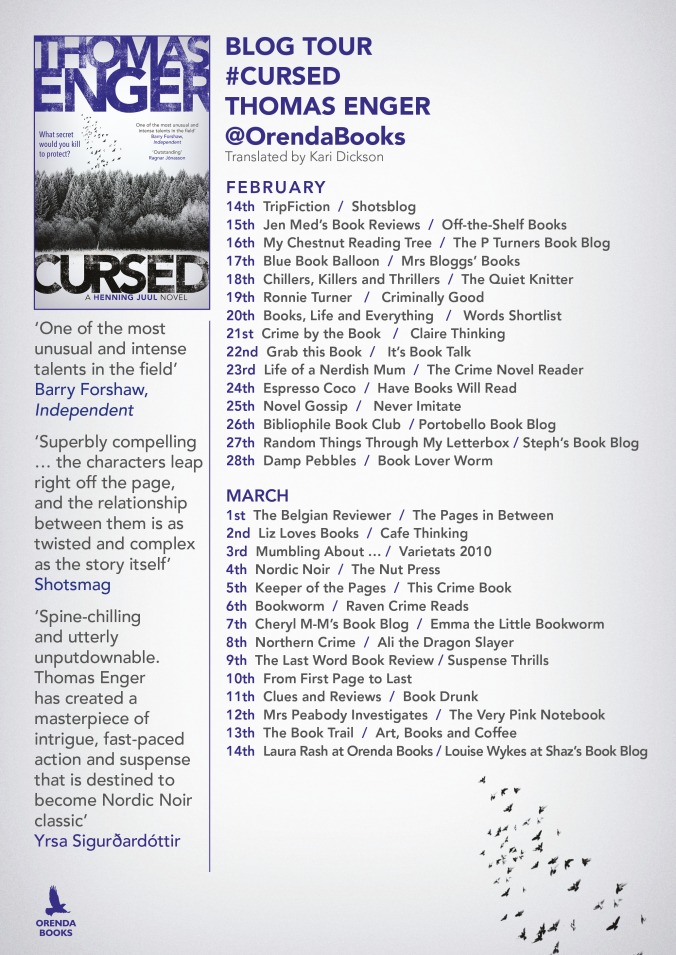