In June 1984 Bruce Springsteen released Born in the USA. It was the most successful album in America in 1985 (the year following its release), shifted over 30 million copies, spawned SEVEN Top Ten singles, saw Springsteen shift from selling out arenas to stadiums and launched Boss Mania. Just as America’s celluloid heros took the form of muscle-bound Vietnam vets, a gym-enhanced Springsteen preached his own unique take of Heartland Rock to the masses from the radio to stages around the world and MTV as Bruce embraced the video format. 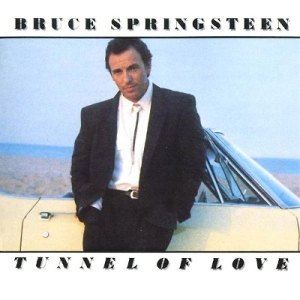 So how do you follow that? If you’re Bruce Springsteen, you demur from the expected. Exhausted and, according to many a report, changed by the success of USA (how you could you not be?), Springsteen took something of a break by his standards and focused on his personal life. At the peak of Boss Mania, Bruce met and married actress Julianne Phillips and sought the settled down personal life that had thus far eluded him. He kept a low profile living on the west coast for a year then, in 1986, logged a series of solo sessions in his home studio, Thrill Hill West. But, with a market and fan base hungry for new product, those sessions were abandoned and focus shifted to preparing his first live album. Live 1975-1985 was released against advance orders of 1.5 million.

As 1987 got under way Bruce headed back to New Jersey and began work on his next studio album, cutting three songs in one day. This time round, though, the writing took a different direction and most of the recordings were completed alone and with little involvement from the E Street Band*. Springsteen made a conscious decision to step back from the bombast.

“I really enjoyed the success of Born in the U.S.A., but by the end of that whole thing, I just kind of felt “Bruced” out. I was like “Whoa, enough of that.” You end up creating this sort of icon, and eventually it oppresses you….So when I wrote Tunnel of Love, I thought I had to reintroduce myself as a songwriter, in a very noniconic role. And it was a relief.”

Tunnel of Love is often referred to as the point at which Bruce began writing about men and women in relationships. That’s certainly not true – he’d been doing so for most of his career – only those relationships were more ‘fairytale’ (bleak or joyous) and told from the somewhat distant standpoint of the loner image Springsteen’s previous lack of commitment in the arena had afforded him. No; Tunnel of Love is Springsteen’s first set of truly nuanced, intricate, intimate and mature relationship songs that handle adult relationships and, yes, chiefly, marriage.

In focusing on his own relationship and putting those thoughts to song, Bruce created his most personal album to that point. It was clear that for the most part, these songs – besieged by inner demons – were based on personal experience. Of course, this inward focus didn’t please all. When he played the opener (the sparse ‘Ain’t Got You’) to Steven Van Zandt, it led to one of the biggest fights the pair had had- “I’m, like, ‘What the fuck is this?'” recalls Van Zandt. “And he’s, like, ‘Well, what do you mean, it’s the truth. It’s just who I am, it’s my life.’ And I’m like, ‘This is bullshit. People don’t need you talking about your life. Nobody gives a shit about your life. They need you for their lives. That‘s your thing. Giving some logic and reason and sympathy and passion to this cold, fragmented, confusing world – that’s your gift. Explaining their lives to them. Their lives, not yours.'”

For an album opener, Ain’t Got You, is an odd one. I imagine it was sequenced in that way to give as clear an indication as possible that this isn’t Born in the USA 2. But it’s ‘Tougher Than The Rest‘ that sets the tone for the album – layered, synthesiser-heavy sound with a bit of menace and shot through with personal lyrics.  For my money (and my blog), that personal insight adds a truth and grit to these songs that had erstwhile been absent from Springsteen’s relationship songs and look for a larger goal. No longer do Bruce’s characters jump in a car and go looking for a promised land, Tunnel of Love (as with Nebraska) finds them dealing with the fact that the answers to their troubles lie with themselves. In ‘Cautious Man’ Bill Horton even heads down to the highway but “when he got there he didn’t find nothing but road”.

The album isn’t entirely without the sheen and polish that would lure radio, though and Springsteen threads his quieter, more subdued and introspective songs around a roster of FM-friendly tunes. The album’s centre piece ‘Brilliant Disguise‘ (which Springsteen has referred to as containing the real crux of the album in its lyrics) was a Top Five hit and a further four of its songs were released as singles** including the album’s sole out-and-out rock tune ‘Spare Parts‘. Personally, my favourite of those is ‘One Step Up’ – that simple but effective melody that ticks away throughout just clicks perfectly for me.

Given the events that followed its release, Tunnel of Love is mostly viewed as Springsteen’s ‘divorce album’ – he’d soon part ways with both his wife and the E Street Band – and so it tends to be signposts for this that are looked for in the lyrics. Certainly ‘One Step Up’ with “we’ve given each other some hard lessons lately
but we ain’t learnin” fits that mould but to single-track the album in such a way would be way off as it’s much more of a multi-dimensional album than that. Songs like ‘All That Heaven Will Allow’ and ‘Valentine’s Day’ are those of a man still looking for the salvation of love (“They say he travels fastest who travels alone, but tonight I miss my girl mister tonight I miss my home”).

Still, with the hindsight of history, the gruff “Thanks Juli” in the liner notes, it’s going to be hard for Tunnel of Love to be seen as anything other than an insight into the state of the Springsteen’s marriage. Slipping into the jet stream from Boss Mania meant that Tunnel of Love did well upon release though Springtseen’s own attempts to pare down the hysteria, the hushed atmospherics of the album and the retreat from the limelight that followed has meant that this has become one of his most over-looked albums and one barely touched upon live any more. Perhaps that’s down to it’s meaning for Springsteen himself – as Bob Dylan said of his own similarly-themed album Blood On The Tracks: “A lot of people tell me they enjoy that album, it’s hard for me to relate to that. You know, people enjoying that type of pain.”

For me Tunnel of Love is one of Springsteen’s very best – that’s why it’s up here in the list as it’s listened to so very often. Lyrically I don’t believe he’s ever been so sharp and insightful. Yes, the production is a little 80’s but it’s nowhere near as over punched as USA – hell, at times the vocals are clearly cut in a small room – and there’s so much more to this album than often considered and more revealed with each listen and the passing of time and experience. One summary I found while putting this together gets it right on the nail so I’ll finish with that and urge all to give this gem a fresh spin: “The songs are about men and women who flirt, have sex, fall in love, get married, get bored, have sex with other people, and wind up stuck in the middle of that dark night from the second disc of The River.”

*While Tunnel of Love was the first real studio album to name the band, the E Street barely feature – Clarence Clemons’ sax is missing completely and his only credit is for backing vocals on ‘When You’re Alone‘ (I guess he’s somewhere in the mix). It marked as big a change to his established sound as Nebraska did and was part of Springsteen’s belief that he’d achieved all he could with the E Street Band’s sound – even on the following tour he swapped positions around to try and mix things up.

**Though not all were released in every territory, Springsteen perhaps wary of over exposure following USA.

17 thoughts on “Least to Most: Bruce – Tunnel of Love”