According to Goodreads I’m pretty much on track for my 40 books challenge this year – two days into July I finished reading the 21st book I’d started in 2017.

So with a longer review for one of those four cleared since I last dropped any summary, here are those other three rounding out the list of those completed. 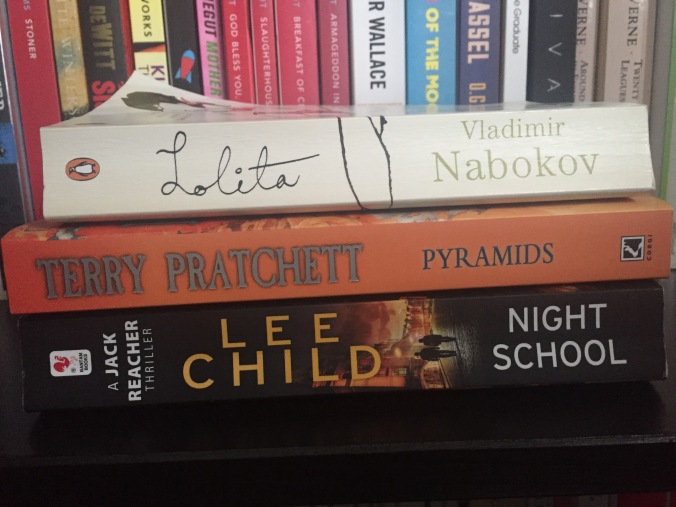 The most recent in the Jack Reacher series and one which – perhaps as Child didn’t know where to take his one man army immediately  after Make Me – hurtles us back in time to the mid-90’s (I wouldn’t mind getting on that time machine) to a time when Reacher was still actively serving in the army.

I’m now up to nine of the twenty-one Reacher novels and I’m beginning to be able to form an impression as to which ones are strong and which ones are merely ok. For my money this one sits in the latter category.  Make Me was a real strong entry after the relative water tread of Personal and took Reacher in a direction that showed growth and potential. By heading back into the past Child removes any real sense of jeopardy and it becomes more of a “Reacher gets into fights in Germany” read than anything else. The closeness of events to those of Killing Floor mean there’s nothing revelatory about Reacher’s past offered up and Child’s method of writing without knowing where events are going is too often on display when it comes to the ‘mystery’ at the centre of events.

Let’s hope The Midnight Line is another step forward rather than more standing still. Not bad but I’d be disappointed if I’d paid anything more than the £2 this one cost me.

Lolita by Vladimir Nabokov (some spoiler)

This one had been sat on the Want-To and then the TBR list and pile for a while now. My wife got to it first and praised it and there’s no denying the regard it’s held in. I’d be gobsmacked if somebody hadn’t heard of it; its infamy probably known more than its contents.

So… do I rave about this book? Well, nobody can write like Nabokov, that’s for sure. I’d not read a line by him before now but even the first sentence is pure brilliance: “Lolita, light of my life, fire of my loins. My sin, my soul. Lo-lee-ta: the tip of the tongue taking a trip of three steps down the palate to tap, at three, on the teeth. Lo. Lee. Ta.”

The dark comedy is sublime, the character of Humbert is one for the archives and so brilliantly painted and there are times when one can’t help but feel for him and, yes, so much of this misperceived (by those who haven’t read it) novel is less about Humbert’s pursuit of his nymphet as it is about Lolita’s absolute playing and exploitation of his sickness.

BUT, here’s what stops me wanting to read this again and again in the same way I do about a book like The Master and Margarita* and maybe I am a prude, or over-thinking this but a large part of this novel is essentially Humbert on a cross-country tour of America having sex with a very under-age girl. It makes for a very uncomfortable read – especially when he points out her crying herself to sleep every night – and, yes, this is intended, yes Lo is “seduces” him and yes his revelling in such activities makes the downfall so much more dramatic  but the lengthy segues that detail the realisation of Humbert’s desires (no matter their forming and Lo’s scheming) are still just too visceral to make an enjoyable read for my tastes.

But – while I won’t necessarily read this one again – it is a hugely well written and brilliantly told story that underlines Nabokov’s importance in the literary cannon and should be read at least once but any such student of the form.

Pretty much impossible to review any of Sir Pterry’s novels in anything other than adoration. I’ve mentioned before both that it would be tricky to overestimate the  importance of Terry Pratchett in my library and literary explorations  and my desire to gradually re-read the Discworld series.

I think Pyramids often slips through the cracks when people talk about Discworld novels, I might be wrong. It’s not one that features any of the recurring characters – there’s no Rincewind or Nanny Ogg, for example – but it’s an important one. Sitting seventh in the published order it marked Terry’s first move away from the Wizzards and Witches that had dominated thus far. Prior to re-reading this one I’d done the same with Sourcery and couldn’t help feeling that perhaps even the writer was getting a little tired of the theme. Pyramids was one of the first in what’s now called the ‘cultures’ series as well as the exploration of belief on the Discworld.

Like many of those pre, say, Men At Arms, I had only vague recollections of Pyramids having read it originally some two decades ago and not since. Of course I remembered Pteppic and You Bastard, the Disc’s greatest living mathematician and – as with all of those I’ve revisited in the last couple of years – reading this one again was a real joy. Preatchett really was in a league of his own and to sit there chuckling away at this one served just to remind how much of a loss it is to no longer receive the joy of a new Discworld novel every year or so.

*I cannot recommend this one enough, just make sure you get a good translation as I’ve seen far too many bland ones on the shelf that seem to suck the passion and charm out of the prose.