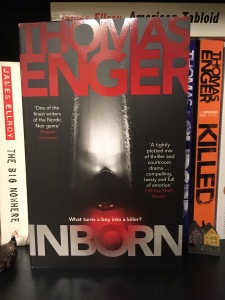 From the PR: “When a teenager is accused of a high-school murder, he finds himself subject to trial by social media … and in the dock. A taut, moving and chilling thriller by one of Nordic Noir’s finest writers.

When the high school in the small Norwegian village of Fredheim becomes a murder scene, the finger is soon pointed at seventeen-year-old Even. As the investigation closes in, social media is ablaze with accusations, rumours and even threats, and Even finds himself the subject of an online trial as well as being in the dock … for murder?

Even pores over his memories of the months leading up to the crime, and it becomes clear that more than one villager was acting suspiciously … and secrets are simmering beneath the calm surface of this close-knit community. As events from the past play tag with the present, he’s forced to question everything he thought he knew. Was the death of his father in a car crash a decade earlier really accidental? Has his relationship stirred up something that someone is prepared to kill to protect?

It seems that there may be no one that Even can trust.

But can we trust him?

A taut, moving and chilling thriller, Inborn examines the very nature of evil, and asks the questions: How well do we really know our families? How well do we know ourselves?”

CAUTION: A tiny whiff of a spoiler is contained within..

Thomas Enger’s Inborn has a fantastic opening. By this I really don’t mean the rest of it isn’t worth the trees it’s printed on, far from it.. but that opening murder, bloody hell. Johannes Eklund is a teenager with a bright future who happened to be in the wrong place at the wrong time. His attempt to flee and his final moments make for as powerful an opener as I’ve read this year: a vividly brutal murder where you feel the fear and panic as it consumes Johannes, made all the more powerful as, beyond being a particularly violent end, it’s happening to a kid in his teens.

After the initial hook and shock Inborn is a real slow burner at first as Enger lines up all the pieces – aided by nicely employing different narratives- and then there’s a moment about a third of the way in where it caught me and I wasn’t able to put it down until the early hours of the morning when I’d finished the whole thing with each of my “ah so he/she’s the killer” assumptions blown apart as soon as they’d formed.

Thomas Enger, as anyone who’s read his Henning Juul books will agree, has a real knack for writing parents dealing with the murder of their child in a way that’ll punch you right in the guts and those scenes in Inborn – parents rendered numb and desperate with grief – are particularly affecting.

Much as with his Henning Juul series, Inborn slowly but surely unravels a compelling and intricate web of lies that have been lurking beneath the surface of this small town. I was thoroughly gripped as the reason Mari Lindgren ended her relationship with Even was revealed – even if (here’s that SPOILER), in the end, it had nothing to do with her murder after all.

The characters that populate Inborn are richly detailed and the fact that they made me feel old shows how well written the teen characters are. The gits. As great as the Even narrative and character is, the stand out for me is Yngve Mork. The local policeman, barely coming to terms with the recent death of his wife is a beautifully written character that I could happily go through a series of novels.

Inborn is a thoroughly engrossing and rewarding read with plenty of sharp turns and surprises to ensure you stay hooked to the end. Exceedingly well written, brilliantly plotted and wholeheartedly recommended.

My thanks, always, to Karen at Orenda Books for my copy and to Anne Cater for asking me to take part in this blog tour. 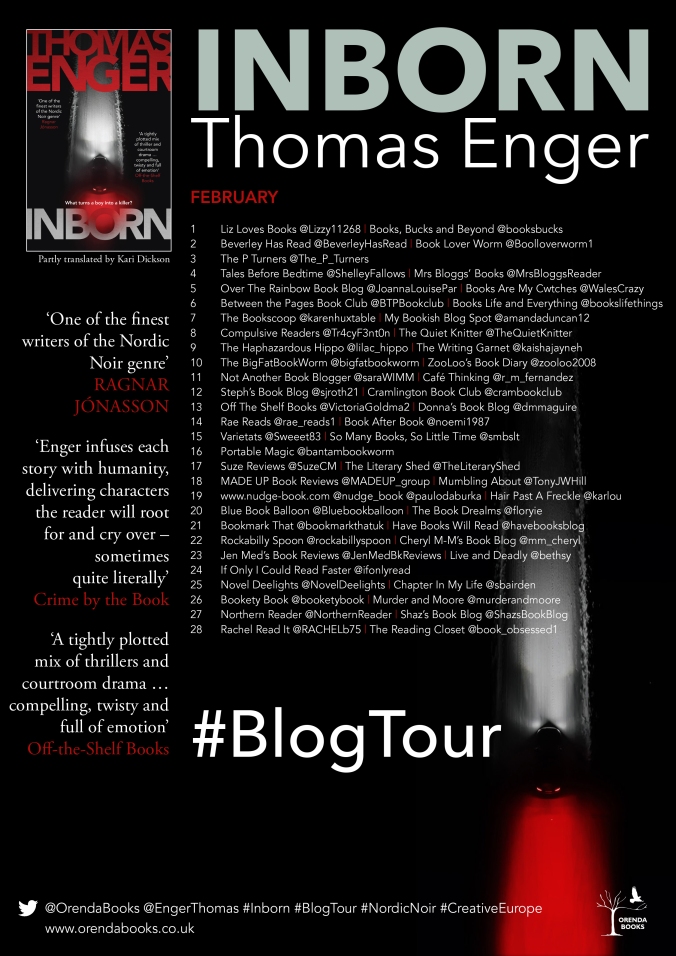 One thought on “Blog Tour: Inborn by Thomas Enger”

“Well maybe you’ll be out there on that road somewhere,
“I got this feeling, I can't keep it down anymore
“Johnny works in a factory and Billy works downtown
“No time, no place to talk about the weather...”
Monday morning mud and Mogwai.
“A coffee machine that needs some fixing, in a little café just around the bend”