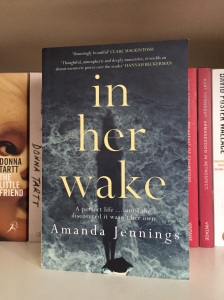 Heads-up; the tiniest whiff of a spoiler may be contained in the following.

Who are you? What is it that makes you you? Is it something pre-programmed by genetics or are those things that make you ‘you’ environmental; nature vs nurture? What if the person you thought you were, those experiences that shaped you, turned out to be a lie? Would you still be ‘you’?

We join Bella as she’s heading home to her mother’s funeral with her husband, David. It’s clear from the off that Bella’s childhood hasn’t been simple – with “memories of bolted doors and claustrophobic loneliness”- and that her marriage is pretty far from ideal too. Her brief interactions with her father, Henry, are short and stilted and end with his asking for forgiveness – there’s a real sense of something ominous lurking beneath the surface from the off.

When Bella finds Henry dead one morning in his study, having slit his wrists the night before, his guilt-ridden suicide note finishes with what has to be the most pedestrian manner of delivering something earth-shattering; “Elaine and I are not your real parents. We didn’t adopt you and we didn’t foster you. Your real mother is a woman named Alice Tremayne.”

I admit this bomb of a revelation spun me around – In Her Wake very quickly became a different book to what I was expecting and held me in its thrall as Bella, determined after being essentially a prisoner to one controlling influence or another all her life to find out what she’s missed out on, seeks out in search of her real life.

Reality, though, has a frustrating way of being a little out of sync with expectations and what awaits Bella is somewhat removed from the idyllic reunion she hopes for. Instead she has to come to terms with the dark reality of what having a child abducted can do to a family and her mother, who’s depression at her loss sent her into a catatonic state requiring 24/7 care from Bella’s older sister – all the while struggling to put together the dreamed-of vs reality and the identity struggle between who she thought she was, the person she could have been, actually is and wants to become.

In Her Wake is a beautifully written book. With a real sense of warmth and genuine twists and turns of plot. Utterly compelling from first page until last it is a truly original story.

Cornwall is painted with suitably loving and almost poetic prose and serves as a mirror for the positivity and light Bella feels toward her new life vs her old. Indeed when the two do clash it’s against thebackdrop of a storm.

The characters all ring true and are given a good sense of dimension and Bella is a compelling and convincing voice for the first-person narrative.

Of course, first-person narrative has it’s limitations when it comes to delivering a fully rounded take on a story. So Amanda Jennings peppers the narrative with diary-like entries chronicling just how Henry and Elaine came to take the path they took. It gives these characters a greater fleshing-out and, while not justifying or condoning, offers some form of explanation as to how two people can become so adrift as to abduct a child. I’d argue that it’s more effective than it would have been had such details been discovered first-person as it allows the reader to form their own take without that characters’ filter. It also means the reader has a greater sense of empathy for Bella, knowing just how traumatic a start she had in life and truly pulls you in, giving greater emotional resonance when viewing third-person, almost bearing silent witness to some truly shocking events – it’s so compelling and emotionally gripping that you can’t help but remain transfixed and desperate for more – more details, more understanding and more truth with each piece of the puzzle drawing a gasp as it’s revealed, especially when it comes to the final reveal about Bella.

And here’s the thing; with that final revelation about Bella, In Her Wake broke my heart. Absolutely laid waste to it. I had to stop reading for a day or so. I haven’t read something so emotionally powerful and affecting in some time. The last time I think I’ve been hit quite so hard was possibly by Juame Cabré’s Confessions.

Don’t get me wrong, though; I thoroughly enjoyed this book and for all the heartbreak it is, at its heart, a genuinely wonderful story of hope. No matter how dark the past the future can still be a bright and welcoming place.

I wholeheartedly recommend reading  In Her Wake and am very grateful to Karen at Orenda for my copy and inviting me to take part in the blog tour. If I was in the habit of dropping stars against reviews there’d be five right here. Do, of course, please check out the other stops on the tour. 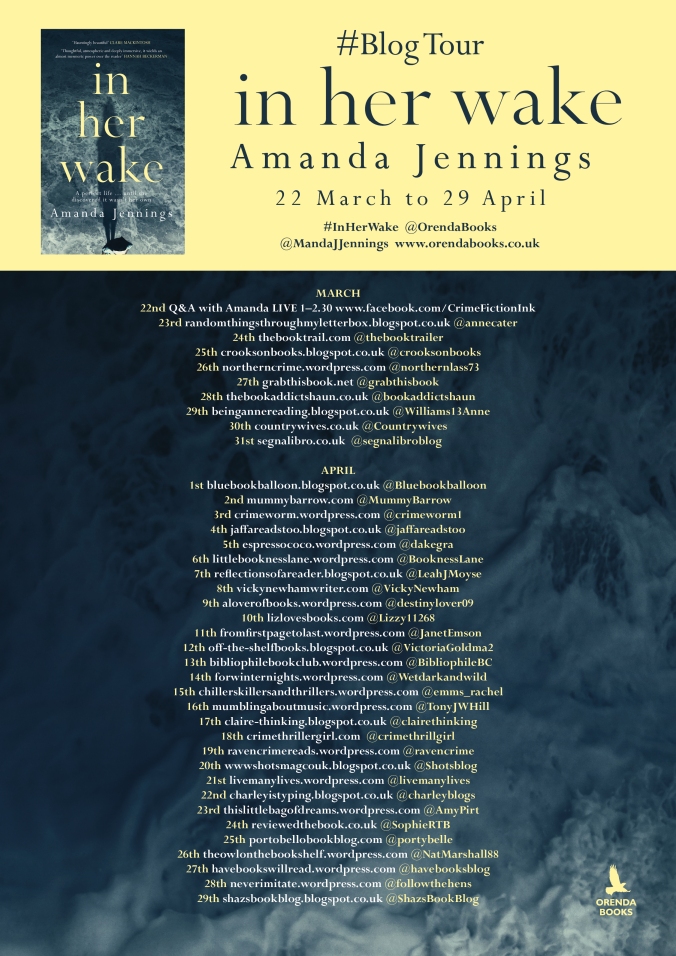