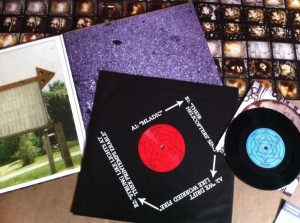 Had I of given time to what is now becoming a near compulsive addiction to share our “I think these were the only releases that mattered” thoughts at the year’s end I would have struggled; last year was more about discovery of existing work than being blown away by new.

It’s fitting, then that the album that I listen to most with a 2012 stamp on it (how many people are still listening to their ‘Best Album’ of last year?) was ‘Allelujah! Don’t Bend! Ascend! by the ever-mighty Godspeed You Black Emperor .

I can’t remember how or when I first hear GSYBE. It would be a safe bet to think it was back in the days I was hanging living above a bakery another guitar player into far heavier and doomier material than I’d listened to at that point. But, no: I’m sure I remember listening to Dead Flag Blues on a train to Brighton – a journey which preceded the aforementioned living arrangement.

The obviously incorrect sensation that I’ve always listened to Godspeed.. is what makes ‘Allelujah… feel like a rediscovery of existing work – to listen to it, to let the needle drop onto the immense, slow-building inferno that is the opening Mladic is akin to hearing something that has always been; has always existed as a part of their musical cannon.

While the band was absent for seven years, ‘Allelujah! Don’t Bend! Ascend! picks up where they left off – it’s grungy, dark, grainy, atmospheric, vast, apocalyptic post-rock done in the manner that only Godspeed You Black Emperor can (though many have tried to fill the hole their break left) and I love it. For while they voyage far deeper into the dark and push the extremes of their sonic palette to lengths few bands would risk, there’s an undeniable craft and, strangely, warmth to it.

Perhaps what makes this one of most enduring albums of last year for me is the fact that while it contains elements of everything that fuelled their earlier albums, ‘Allelujah! Don’t Bend! Ascend!’ is at once Godspeed You Black Emperor nodding to the past but pushing firmly forward.

“Now I’m at home in my own skin,
Heritage trains on an autumnal afternoon
“You can hate on it or you can hug it, you can get all mushy and lovey-dub-it,
“I think it’s dark and it looks like rain” you said “and the wind is blowing like it’s the end of the world”
“I know your name
“Outside there's a box car waiting...”