Think of Iceland and you’ll no doubt think of geysers, calm, tranquil fjords… perhaps even volcanic eruptions. Crime and murder will probably not be one of those connections that springs to mind. The same is certainly true for Evan Fein, an American tourist, as he searches for Grettir’s Pool, an ancient stone-flagged hot bath, down narrow roads and scanning country lanes and farm gates. What awaits Evan, though, isn’t a relaxing dip in steaming water, it’s a dead body, a man brutally beaten to the point that he is “practically unrecognisable,” “where there had been an eye, there was now an empty socket.” 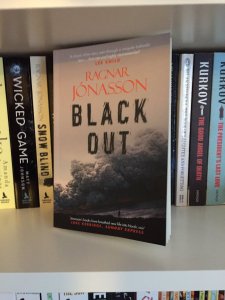 This is the start of Black Out, the latest instalment in Ragnar Jónasson’s Dark Iceland series to be translated into English and published by Orenda Books and it’s bloody good to be back in Siglufjörður once again. Black Out sits second in the Dark Iceland series and picks up after the events of Snow Blind; Ari Thór, while now more at peace in the town, is dealing with the fallout of his confession of infidelity to his girlfriend, Kristín who herself is now living a short distance away in the neighbouring Akureyri. The Inpector, Tómas, is debating his own future in the town after his wife’s move south to Reykjavik and Hlynur is dealing with the chilling consequences of his past.

It’s into this state of distraction that the news of the murder is dropped and Ari Thór and Tómas set about investigating the victim’s connections to the town – the only real starting point is that the victim, Elías, was part of a crew working on the new tunnel. Tómas is far from thrilled at the opening of the tunnel, worrying what it will bring into the town. Strangely enough, the more that Ari Thór digs into the storied past of some of the residents it’s clear that even without infrastructure upgrades, Siglufjörður holds many a disturbing secret. Some people know exactly what Elías was involved in but nobody is talking and so much remains hidden despite the 24-hour light of the Arctic summer that the police are in the dark.

That contrast of tones – darkness in the shadows of an otherwise idyllic scene – is what makes that creeping sense of dread so much more powerful and chilling as, piece-by-piece, the clues come together and the quiet town of Siglufjörður becomes the epicentre of a taught, methodically plotted story involving money laundering, sex-trafficking, child abuse, rape and murder. Be warned – Black Out gets very dark.

This time around it’s not just the Siglufjörður police that are trying to crack the case; Isrun, a news reporter is also chasing down and finding her own leads as she races for an exclusive. The introduction of Isrun means that Jónasson is able to add further elements to the story and take the reader further afield to Reykjavik (shrouded in a volcanic ash cloud) and the politics and rivalries of the newsroom. I’ll avoid going further in terms of Isrun’s involvement in the investigations or her own motivations to avoid spoilers but I will say that it was a genuine surprise and a welcome change up, further evidencing that Ragnar Jónasson’s writing is anything but formulaic. She’s also another thoroughly great and compelling character.

Jónasson has a gift when it comes to crafting memorable characters. Ari Thór, while not always likeable, is given increasing depth and dimension with every instalment and his relationship with Kristín gives greater insight as well as further developing her own character. Somewhat sadly, of all the threads surrounding the main narrative, it’s the sub-plot surrounding Hlynur that is perhaps the most gripping and while having already read Night Blind means I knew where it would lead, was nonetheless genuinely affecting and moving.

Weaving together all the sub-plots of such a multifaceted story could prove challenging yet Ragnar Jónasson makes it seem effortless – while his history of translating Agatha Christie novels into Icelandic means he’s no stranger to mystery writing, it’s his own voice and skill that makes Black Out and the Dark Iceland series one of the most compelling and rewarding additions to the thriller genre. Each instalment delivers more and leaves the reader in eager anticipation for the next. The first snippet of the next instalment (included at the end of Black Out) had me checking the door was properly locked and bolted. Not something I’ve done since I read The Snowman. A series and author well deserving of the highest praise. Very much looking forward to more.

Huge thanks once again to Karen at Orenda Books for my copy and I do wholeheartedly recommend Black Out.

One thought on “Black Out”

Evening, Devon
“Now I drive my Downeaster Alexa
No trains this evening
“All that's sacred, comes from youth
“You put the cock in cocktail, man
“I know a guy who is so cheap that when he goes fishing he puts a picture of a worm on the hook”