From the PR:“One dark January night a car drives at high speed towards PI Varg Veum, and comes very close to killing him. Veum is certain this is no accident, following so soon after the deaths of two jailed men who were convicted for their participation in a case of child pornography and sexual assault … crimes that Veum himself once stood wrongly accused of committing.

While the guilty men were apparently killed accidentally, Varg suspects that there is something more sinister at play … and that he’s on the death list of someone still at large.

Fearing for his life, Veum begins to investigate the old case, interviewing the victims of abuse and delving deeper into the brutal crimes, with shocking results. The wolves are no longer in the dark … they are at his door. And they want vengeance.”

How do I begin to review the latest novel from one of my favourite authors? It’s not easy – I’ve been staring at the screen wondering how to kick this off for a while now. It’s tricky to find a way to sum up just how bloody good a writer Gunnar Staalesen is while at the same time pointing out that Wolves At The Door finds him still at the top of his game. I can’t pour further superlatives on Staalesen than I already have, and I really don’t want to give away too much of the plot of this one – it needs to be read and savoured.

I’ve often compared reading Staalesen to enjoying a good coffee. You don’t throw it back like an espresso and get all hopped-up like an airport-thriller. You savour it, enjoy it and let it ease into your system in an enveloping warmth before you realise you’re hooked and something has got your heart moving a little faster.

I suppose that’s a pretty good way to get going, right? It’s true: Gunnar Staalesen is among the top-tier of writers and the latest Varg Veum novel continues a hot streak that’s about forty years long now.

One of the many joys of reading Staalesen’s work is the precision and warmth of his prose. While there’s not an excess word there’s never a sense of rush; the plot unfolds with expert precision and timing rather than bounding along at a thrill-a-minute pace, even when Varg is both hunter and prey. There’s something deeply satisfying and rewarding in the way the plot of Staalesen’s novels, Wolves At The Door included, comes together, piece by piece as Veum slowly pulls at threads and finds links between the past and present and makes his discoveries by putting in the hard work rather than kicking in doors and heads – not to mention the fact that Veum is, almost despite himself, an endearing character.

Speaking of threads – Wolves At The Door picks up the thread from Wolves In The Dark – with a few vital character developments from Big Sister touched upon too – and it’s a heavy subject matter: the horrendous offences Varg was accused of in that novel and several others were guilty of don’t make for light reading. Yet Staalesen handles the subject matter with care and without exploitation. There are too many third-rate writers out there that would use child abuse and pornography for shock value and handle it like turd in a pool. Staalesen is a writer who knows how to find the heart in a story rather than the shock and that’s infinitely more affective.

I’m now seven novels in to my discovery of the Varg Veuem series. Prior to Wolves At The Door I’d not long finished Yours Until Death, Staalesen’s second from 1979. There’s a steadfastness about Veum that runs through the entire series – he’s an honest, yet flawed character driven by all the right motivations no matter the cost. Yet, forty-plus years in, Staalesen is still able to make his detective a compelling character with enough mystery and development (there’s a big one right at the end of Wolves at the Door) to keep readers wanting more, all the while delivering original and heavy-hitting stories – I don’t think there’s many writers that make that claim, regardless of genre.

If there’s a standard for Nordic Noir then it’s Staalesen who sets it and he sets it bloody high.

My thanks, as always, to Karen at Orenda for both introducing me to Staalesen’s work and keeping my addiction fed, and to Anne Cater for invtiting me to take part in this blogtour. 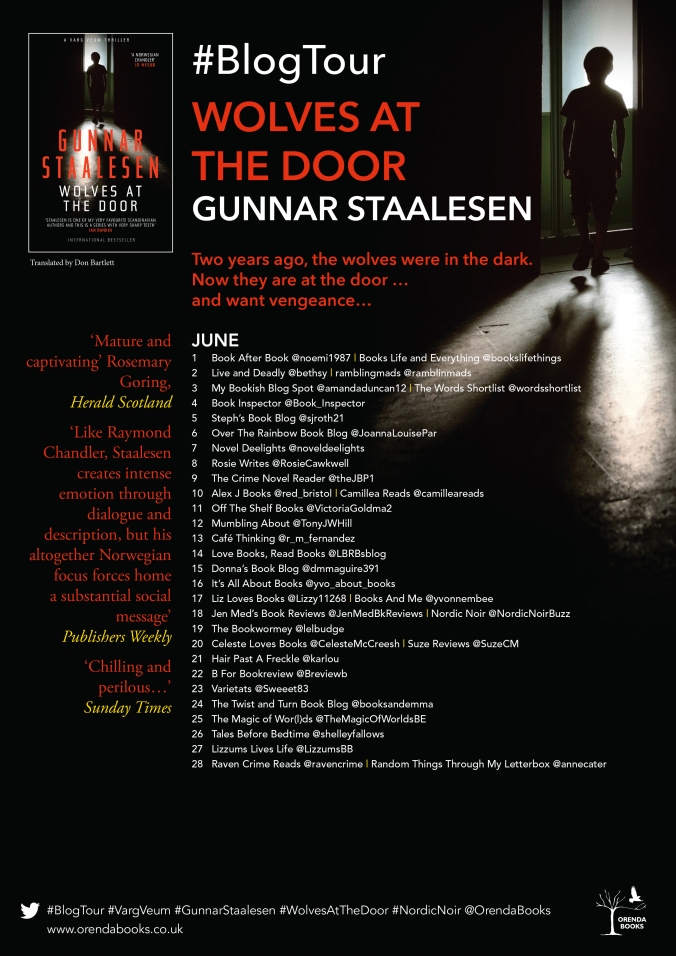 One thought on “Blog Tour: Wolves at the Door by Gunnar Staalesen”