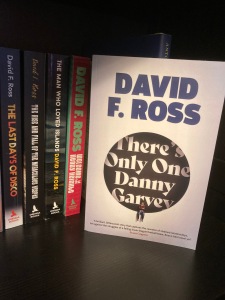 From the PR: “Danny Garvey was a sixteen-year old footballing prodigy. Professional clubs clamoured to sign him, and a glittering future beckoned.

And yet, his early promise remained unfulfilled, and Danny is back home in the tiny village of Barshaw to manage the struggling junior team he once played for. What’s more, he’s hiding a secret about a tragic night, thirteen years earlier, that changed the course of several lives.

There’s only one Danny Garvey, they once chanted … and that’s the problem. A story of irrational hopes and fevered dreams – of unstoppable passion and unflinching commitment in the face of defeat – There’s Only One Danny Garvey is, above all, an unforgettable tale about finding hope and redemption in the most unexpected of places.”

So, let’s get down to it: There’s Only One Danny Garvey is the fifth novel from David F Ross and if you haven’t read any of his books by now I’ve gotta ask; what’s been keeping you, ya bawbag?! David F Ross is one of the sharpest and funniest writers currently putting ink to page and There’s Only Danny Garvey may just be his best yet.

It’s exceedingly hard to combine an engrossing and well crafted story with genuine laugh-your-arse-off humour and still manage to pack an emotional punch – yet David F Ross seems to have found some secret recipe somewhere and pulls it off superbly in There’s Only One Danny Garvey. That he throws plenty of music and pop culture touch stones in – as per each of his novels to date – only makes it all the more enjoyable for me.

There’s so much to shout about in this one it’s hard to know where to start. This is an unreliable narrator like no other. It’s both razor sharp in its delivery and plot and warm and poignant in the details of the characters and community. It’s at once a poignant and evocative time machine back to a mid-nineties working-class community and a gripping slab of literary fiction. Oh, and it’s really, really fucking good.

While the sport – and the role it plays in the community – is at the heart of the novel, There’s Only One Danny Garvey is about lots more than just ‘the fitba’ and, even then, we’re a long way from the Scottish Premiership here. This is a novel of heart, of troubled pasts and dark secrets. A novel of families strained, tortured souls, loss and attempts at redemption. A novel of broken dreams and broken people, a novel with characters that’ll stay with you long after the final whistle has blown. It’s a touching and engrossing novel with one genuine “holy shit” moment after another when it clicks what’s actually happening and – when it turns that corner – really ups the ante. It’s a novel that’s brilliantly written, paced and bought to life; a game transformed by dazzling footwork, a beautiful pass and a precision shot on target into the back of the net. It’s a novel that really must be read.

My thanks to Karen at Orenda for my copy of There’s Only One Danny Garvey and to Anne Cater for asking me to take part in the blog tour.