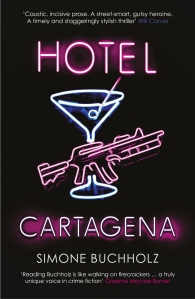 From the PR: “Twenty floors above the shimmering lights of the Hamburg docks, Public Prosecutor Chastity Riley is celebrating a birthday with friends in a hotel bar when twelve heavily armed men pull out guns, and take everyone hostage.

Among the hostages is Konrad Hoogsmart, the hotel owner, who is being targeted by a young man whose life – and family – have been destroyed by Hoogsmart’s actions.

With the police looking on from outside – their colleagues’ lives at stake – and Chastity on the inside, increasingly ill from an unexpected case of sepsis, the stage is set for a dramatic confrontation … and a devastating outcome for the team … all live streamed in a terrifying bid for revenge.

Crackling with energy and populated by a cast of unforgettable characters, Hotel Cartagena is a searing, stunning thriller that will leave you breathless.”

Here we are with Hotel Cartagena and while I’m only a few novels deep into Simone Buchholz’ Chastity Riley series by now I’m gonna kick this review off by saying this is the best one yet!

There’s nothing on my shelves that really compares – or competes – with Buchholz’ narrative prowess. It at once recalls Ellroy’s telegraph style and grit while bringing it up to date with a proverbial kick up the arse in terms of sentiment and pace. Buchholz has a fantastic ability to convey a massive swathe of emotion and personality with the minimum of keyboard strokes and reading her work is always an absolute blast of joy – it’s one of those novels where you’re marvelling at both technique and plot and relishing every second.

Oh yeah, plot: this one’s an absolute belter. I won’t give too many details here so as not to spoil but as both the blurb and cover point out – the bar takeover and hostage situation is driven by a bid for revenge and the story leading up to it.. holy shit what a story! ‘Riveted’ isn’t the word, doesn’t do it justice – once that story line hooked me I couldn’t put it down.

There’s the joyously addictive, slow burning Henning story, the drama as the hostage situation and Chastity’s unravelling as her sepsis sneaks in, and then Ivo stuck outside the hotel and unravelling almost as fast… there’s a lot of great stuff to get your teeth into in this sharp and powerful thriller. Oh, and a climax that’ll leave your gob open.

Hotel Cartagena is another brilliantly written and plotted slab of the great stuff by Simone Buchholz and I heartily recommend getting stuck in at your soonest opportunity.

My thanks as always to Karen at Orenda Books for my copy (and consistently publishing such cracking work) and to Anne Cater for asking me to take part in this blog tour.