There’s no easy way to say this, Kubu. Your father’s dead. I’m afraid he’s been murdered.

Assistant Superintendent David ‘Kubu’ Bengu of the Botswana CID is back. His father, only recently diagnosed with Alzheimer’s, has been violently murdered. Who would murder a frail old man? Why was his father out alone? Who was he meeting?

A Death In The Family is the welcome return of Detective Kubu and this mystery from the writing team of Michael Sears and Stanley Trollip (writing as Michael Stanley) is another gripping instalment set beneath the hot African sun.

While the murder of his father leaves only questions, Kubu is not the policeman to find the answers – to his abject frustrations he is forbidden from investigating the case. Instead, Kubu is assigned to the apparent suicide of a government official. But, as he digs deeper, questions are raised over the involvement of Chinese mine-owners and foreign governments and it becomes clear that there is a lot more going on – as tensions over mine expansion in Shoshong (a town near Kubu’s ancestral home) explode into riots and violence, connections between the cases begin to appear.

What unfolds is a fantastically complex and artfully crafted plot that brings together political corruption, the incursion of foreign powers and companies in search of Botswana’s mineral wealth and the chilling, dangerous paths taken to satisfy greed.

Detective Kubu, in a genre stuffed to the bindings with great characters, is a real stand-out and fast becoming a firm favourite. In my review of Deadly Harvest I pointed out that it’s great to read such a warm character driven by a love of family (and biscuits). As such, Kubu’s grief and frustrations at not being involved in the case are compelling and thoroughly affecting; the authors create a vivid portrait of a genuinely loving family man wracked by the darkness of his father’s murder.

A Death In The Family is a great read that’s full of intrigue and delivers plenty of shock too. Thoroughly well-written and packed with convincing characters and settings. Not to mention it’s also a solid little introduction to rare earth mining.

I, personally, feel I’m somewhat on the back foot as this is already the fifth in the Detective Kubu series (the second to be published by Orenda). That’s more down to my hunger for more than anything else, though, as Messrs Sears and Trollip ensure that each of these instalments work brilliantly in their own right and there’s no need to have read its predecessors to enjoy A Death In The Family as I so thoroughly did.

A highly recommended book and one that rewards on every page.

Thanks, as always, to Karen at Orenda for my copy and do check out other stops on the blog tour. 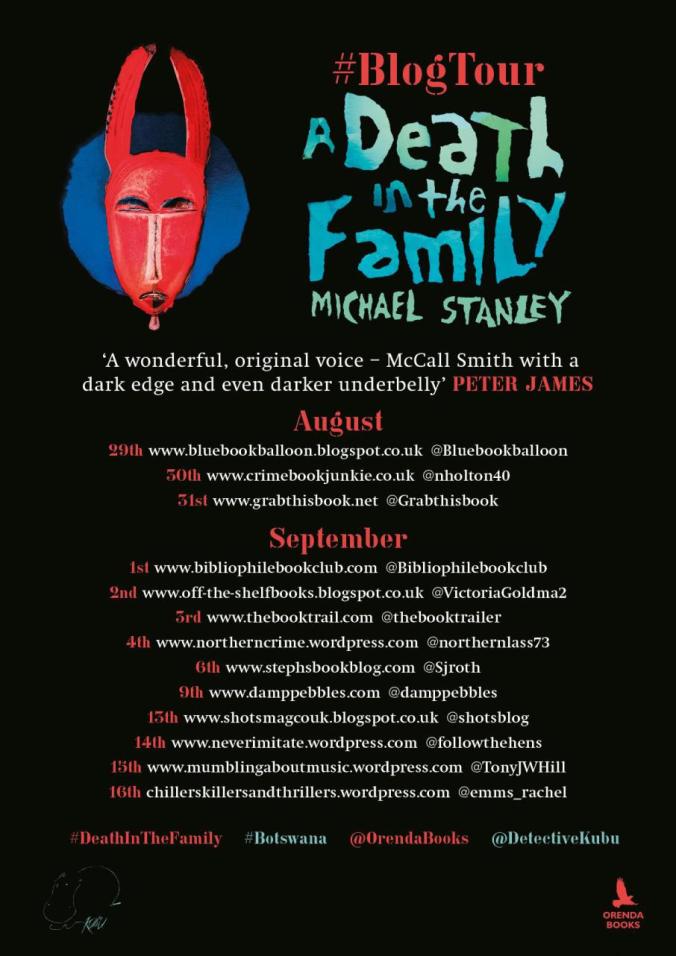 No trains this evening
“All that's sacred, comes from youth
“You put the cock in cocktail, man
“I know a guy who is so cheap that when he goes fishing he puts a picture of a worm on the hook”
Morning, Bedgebury. Been a while
“You know with love comes strange currencies, and here is my appeal...”