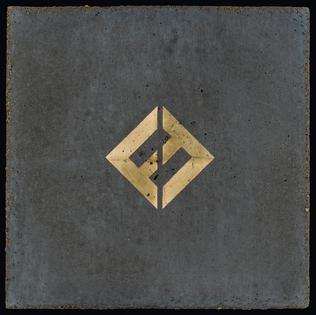 This bloke from the Foo Fighters looks a bit like the drummer from that band Nirvana, doesn’t he?

Despite the PR, expecting the Foo Fighters to break new ground in 2017, some two decades plus into a career that has seen the band grow from a one-man project to stadium-filling rock heavyweights, would be optimistic to say the least. Since In Your Honour Dave Grohl, however, seems determined to try so we fans have been offered our Foo in separate acoustic and electric discs, a ‘serious musicians’ flavour, with ‘raw analogue’ toppings* and with added documentary options on the side. It’s still been Foo, though, no matter how much Mr Grohl has tried to spice it up. Not that there’s anything wrong with that, mind, but, after There Is Nothing Left To Lose, there’s nothing that really sets aside, say, ‘The Pretender’, ‘All My Life’ or even ‘Rope’ as having been on different albums no matter the supposed narrative rules that rock’s smiliest ambassador has sought to apply to them.

Take Sonic Highways as an example – despite the concept and execution, there was nothing, really, to show in terms of sound or execution that differentiated its nine songs from any of the bands other mediocre cuts**. It’s as though there’s no concept or production technique that could change the established loud-quiet-loud-louder and colossal thump of the Foo Fighters at this stage of their career.

I found the concept behind Sonic Highways increasingly odd given how much time and effort the band had put into building their own studio (Studio 606 West) and HQ less than a decade before and seemingly abandoned after two albums – Wasting Light was recorded in Grohl’s garage. In fact, when Grohl declared that he already knew how the next Foo Fighters album would be recorded and that it was something so exciting that no band had ever done before…. I groaned a little inside. Why couldn’t they just get in their studio – or any studio – and apply themselves to the songs not to achieving some wacky concept?

Thanks to PJ Harvey, it seems, I’ve got my wish. Turns out that Dave Grohl’s ‘big idea’ for Foo Fighters Album 9 was to set up a studio on stage at the Hollywood Bowl and record it live in front of a 20,000 strong crowd. Shame, then, that discovering that PJ Harvey’s The Hope Six Demolition Project had been recorded in the same manner (albeit a far more English approach via an art installation in Somerset House) took the shine off the idea for him.

Instead Dave did what he describes as the most unexpected thing for his band to do and took the Foo Fighters into a big studio – EastWest Studios – and hired a producer to oversee their next album, gimmick-free. Well, I say that… this wouldn’t be a Foo Fighters album in the 21st Century if there wasn’t some form of ‘gimmick’ involved, would it? This time it’s the involvement of producer Greg Kurstin. Picked by Grohl for his work with his own band The Bird and the Bee, Kurstin is perhaps better known for his work with acts like Kelly Clarkson, Sia, Lily Allen, Ellie Goulding, Pink and that moaning banshee’s god-awful radio-melter ‘Hello’. Given the combination of a pop and rock heavyweight’s, the ‘gimmick’ of Concrete and Gold is that it’s being pitched as sounding like “Motörhead’s version of Sgt. Pepper.”

So…. does it? Of course it fucking doesn’t. Don’t be daft. But….. it takes a very very good stab at doing so and feels pretty much unlike anything else Dave and his merry men have done before. Yes, the sound is unmistakeably Foo but this time around the band are stretching out in ways they haven’t before and deliver plenty of unexpected and, frankly, great twists to deliver an album that offers  psychedelic, prog-metal, abstract, heavy and, yes, Beatles-esque shades against a Foo Fighters sound that is, for the first time in a long time, suitably balanced and mixed by a producer.

Kicking off with a short throwaway ripped apart by a heavy rocker will inevitably draw comparisons to The Colour and the Shape but ‘T-Shirt’, for all it’s brevity, is a superior song to ‘Doll’ and pushes Concrete and Gold‘s confidence and palette front and centre and – even after maybe a hundred listens at my son’s request – ‘Run’ is an out and out fucking BEAST that ranks as one of the Foos’ best:

‘Make It Right’ offers more than the straight-ahead rocker it initially suggests itself to be, there’s a funk of a groove behind it, unexpected chord changes and a surprising slab of background harmonies that when combined bring, to my mind that is, Aerosmith’s Draw The Line*** album. Initially I’d been slightly less impressed by ‘The Sky Is A Neighbourhood’ when catching the videos of its live reveals but the album version, along with many of the tracks here, shows that – despite their straight ahead live mode – on Concrete and Gold the Foos have actually become a studio band with plenty of unusual-for-Foo song structures and production choices that blend so well. Take the strings that slip so unobtrusively into ‘The Sky…’ as to change a song type they’ve churned out many a time before into something that genuinely lifts skywards.

‘La Dee Da’ falls into the same category for me – I wasn’t impressed by it’s live rendering but, away from the bludgeoning and sonic flattening of radio too, on Concrete and Gold I ‘get it’. If it’s Fab Four you’re after, there’s one of em on ‘Sunday Rain’ – as Taylor Hawkins is too busy singing this spacey (seriously, check out his ‘Range Rover Bitch‘) rocker, Sir Paul McCartney plonked down the drums. Sequentially it’s a good fit because, to my ears, the preceding ‘Happy Ever After’ makes me think of ‘Blackbird’ or one of Macca’s early solo melodies.

‘Dirty Water’ is an early favourite for me; it brings forth sounds of both early Foo Fighters, a playful lightness and airy feel (and, again, some real Beatles tinges) but is bolstered by something sharper and more focused that comes from both a more practised song craft and production that, despite its length, it remains on track and charm. In that respect it serves as a strong summary of the album as a whole.

Concrete and Gold doesn’t quite achieve the premise of its PR but show me an album that does. It does, however, stand apart in the Foo Fighters cannon and is the sound of the band playing to those highs and strengths its achieved during its ascent to stadium rock act while also stretching out enough sonically to both refresh its sound and offer a welcome hand to those fans like me that had begun to wonder if Dave Grohl had anything interesting left up his sleeves. Turns out he does.

I hadn’t pre-ordered this one but I’m already on my third listen of Concrete and Gold and haven’t skipped a track left. For all his efforts to make a ‘concept’ of an album, Dave Grohl has, when he wasn’t even trying to, created a fucking belter of a Foo Fighters album that works not just track-by-track but as an album in itself. Well worth a listen or three.

*I’ll put this out there: Wasting Light is the best Foo Fighters album to date.

**Concept over substance unfortunately applies to the album and I wouldn’t slip any of its tracks onto a ‘Best of’ comp.