From the PR: “Two days before Christmas, a young woman is found dead beneath the cliffs of the deserted village of Kalfshamarvik. Did she jump, or did something more sinister take place beneath the lighthouse and the abandoned old house on the remote rocky outcrop?

With winter closing in and the snow falling relentlessly, Ari Thór Arason discovers that the victim’s mother and young sister also lost their lives in this same spot, twenty-five years earlier. As the dark history and the secrets of the village are unveiled, and the death toll begins to rise, the Siglufjörður detectives must race against the clock to find the killer, before another tragedy takes place.”

With Whiteout, the fifth of his Dark Iceland novels published into English by Orenda Books (though, I think, the fourth chronologically?), Ragnar Jónasson seems to have set himself a challenge – a remote and isolated location, a small (and dwindling) number of witnesses / suspects and a limited time window for the investigation. Throw in the possibility that there was foul play afoot in the deaths of the victims mother and sister years previously in the same location and Mr Jónasson has created a belter of a read.

Taking  characters and events out of Siglufjörður removes both the characters and the reader from the relative comfort zone of the former instalments of the series and adds a real edge to proceedings, heightened further by both the remoteness of Kalfshamavík and the chilling nature of all three deaths under investigation. Setting such a chilling (and, come the reveal, thoroughly disturbing) series of events against the backdrop of the build up to Christmas and its festivities doesn’t hurt either: in place of festive cheer and celebrations there’s deaths and secrets being dragged up.

As this is part of a series – though would certainly work just as brilliantly as a stand alone – I’ll restrain myself from dropping any spoilers.

Having translated some fourteen Agatha Christie novels into Icelandic before embarking on his own writing career, Ragnar Jónasson was no stranger to the genre but while I’m sure there will be comparisons drawn (I’ve never read a Christie novel but am familiar enough with the style, certainly thanks to the numerous television adaptations), it’s Jónasson’s skill as a writer that makes the Dark Iceland series so addictive. With Whiteout he expertly weaves a deep and intricatly plotted mystery  that’s genuinely compelling with calm and deliberate pacing that slowly builds to a dramatic reveal. That he does this against the challenges of both the closed setting and ticking clock without making it feel rushed is even more impressive.

One of the other compelling aspects of the Dark Iceland series has been the life and development of Ari Thór. While the pacing and time pressure of the main narrative of Whiteout don’t necessarily allow for too much insight into Ari, what there is still enough to ensure the reader remains plenty interested in this Icelandic copper and most certainly lays the groundwork for some revelations to come.

In a way, the location and focus of Whiteout make it an unusual instalment in the Dark Iceland series though Ragnar Jónasson’s skill as a writer ensures it remains an essential one.

Thanks to  Orenda Books and Anne Cater for my copy and inviting me to take part in this blogtour. 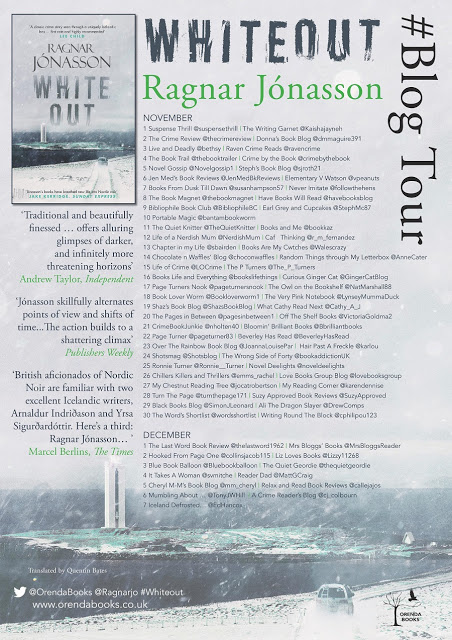 One thought on “Blog Tour: Whiteout by Ragnar Jónasson”