Like any avid reader and devourer of the written word I carry a continually evolving ‘wish list’ with me (it’s on my phone) to refer to whenever I find myself in a bookshop. At the top of that list are a couple of authors represented by name only. These are authors where it’s a case of wanting to get hold of anything they’ve written.

Kjell Ola Dahl is amongst those authors. He’s one of the godfathers of the Nordic Noir genre and since I was introduced to his Oslo Detectives series with last year’s Faithless I’ve been anxious to read my way though his back catalogue. This year’s The Ice Swimmer (review to follow) is another ridiculously good installment in the series – absorbing and masterfully written.

As such I’m delighted, as part of the blogtour for The Ice Swimmer (out on ebook now and paperback April 30th via the wonderful Orenda Books) to host a guest post from the author himself. So I’ll shut up and get out of the way…

My first novel was a police procedural, and I didn’t reflect much on the implications of this choice at that time. I was inspired by writers like Ed McBain, who wrote about Steve Carella and a collective of police officers solving crimes in the 87th precinct in a fictive city called Isola. One thing I liked about those books was that McBain wrote about the full collective. The readers got to know many of the police officers. And when McBain changed the main protagonist in some books, Steve Carella was always there, although not always at the front of the action. McBain even chose criminals for protagonists in some of his books.

After publishing Lethal Investments I did not stay with my police officers, and I went on to write other things. The second book in the Oslo Detectives series was published years after the first one. But then I said to myself, you cannot stop at two: A trilogy is the thing. So I was quick this time and published the third book in the series a year later. But after that novel – The Man in the Window – I returned to my old sins, writing other things.

This year in Norway, I will publish the ninth book in the Oslo detectives series. I still write other things in between – fiction, non-fiction, short stories, crime fiction – and I always write under my own name. Ed McBain used a lot of pseudonyms: Richard Marsten, Hunt Collins, Curt Cannon, Ezra Hannon and more, and not one of these names was his own! Privately he called himself Evan Hunter. And even the name Evan Hunter was a pseudonym: his Christian name was Salvatore Albert Lombino. It is like one of those Russian dolls. Inside every name, new ones would pop up. I guess Mr Hunter/Lombino himself had some sort of system for the use of names. His production was huge.

The use of pseudonyms is a widespread habit among writers – especially writers of crime fiction. Even Georges Simenon used a lot of them. And the truth is, I don’t really understand why.

Many of my fellow writers use their series to explore their one and only protagonist. I stick to the method of Ed McBain. I explore my collective. The protagonist in the Ice Swimmer is Lena Stigersand, a female police officer in her mid-thirties. She was not present in the first book in the series, and first appeared with minor roles in the two novels previous to the Ice Swimmer. Even if she is the protagonist in The Ice Swimmer, there is one super protagonist in the series – Mr Gunnarstranda. In fact, everything in the series rotates around him, and he has developed over the years. He is no longer as grumpy as he was in the first book. And these days he is more into jazz music than he was to begin with. I think it is because I know him better now. But he is still a widower. And he still doesn’t have a first name. That is a fact. I have never dared to suggest a first name for him. I fear he won’t like my suggestions very much. Personally, I think that shows how strong he is as a character. He is still mysterious to me, which means that he will still be able to surprise me. It also tells me that I will write more about him. I am still curious about his whereabouts and especially curious about his first name. But I doubt I will ever find out what it is. 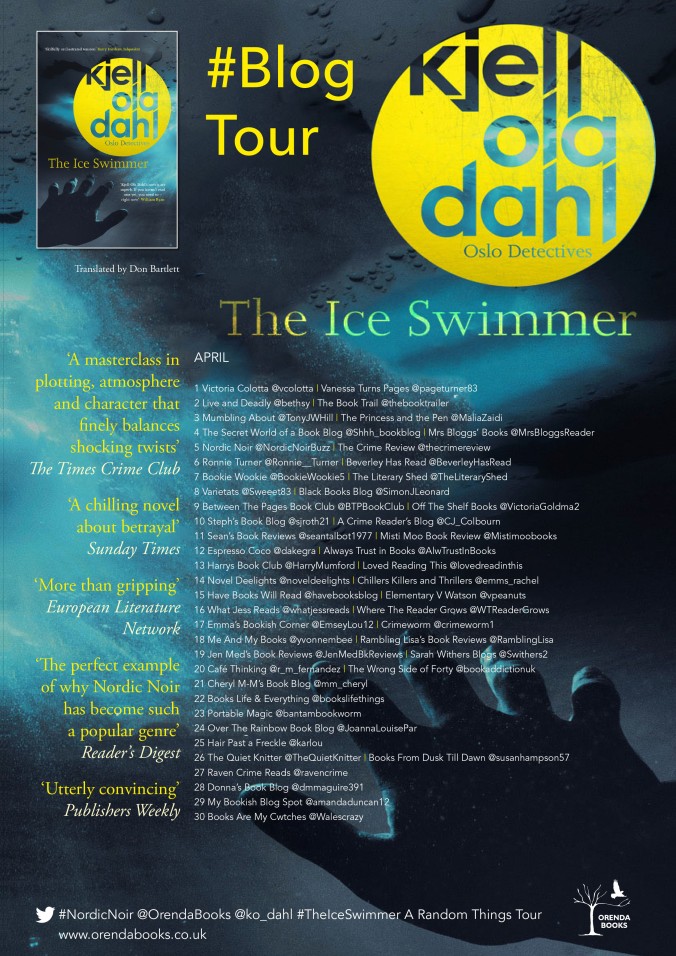